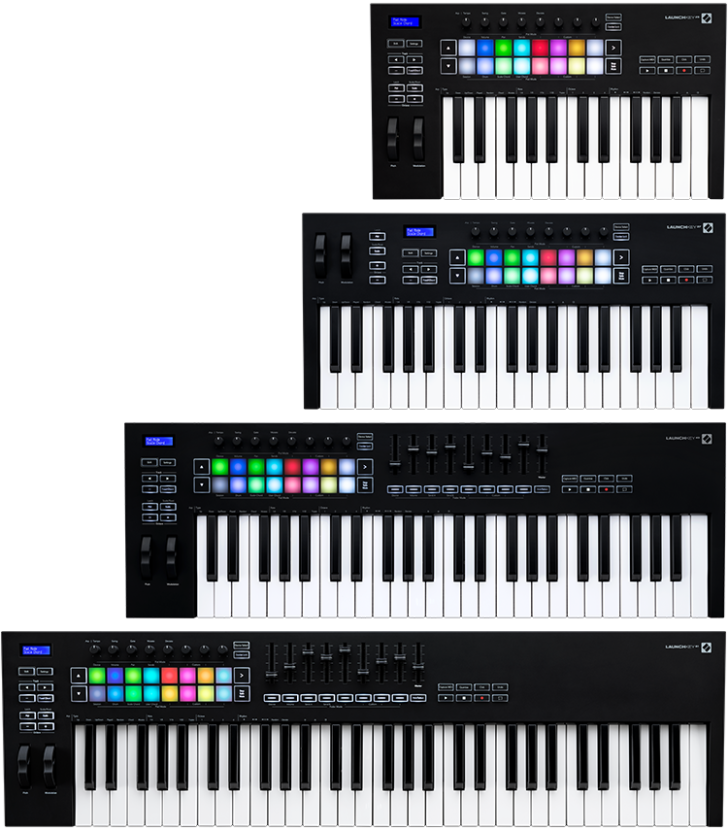 The Launchkey mk3 controllers combine a velocity-sensitive keyboard and extensive control features with deep integration with Ableton Live, along with support for Logic, Reason, Studio One, Cubase, Pro Tools and other DAWs.

Working closely with Ableton, Novation have ensured that Launchkey [MK3] provides deeper and more immediate access to Ableton Live’s controls than any other controller in its class.

Launchkey [MK3] controllers are available in 25-, 37-, 49- and 61-key variants, making it easier than ever for creators to pick the size that suits. For the first time in the Launchkey range, there’s a 37-key model, which answers the requests of music makers who want a compact controller large enough for two-handed keys work. Its pitch and mod wheels are relocated to the top panel so the three-octave keyboard can fit into a small form factor, so it’s ideal for users with space limitations. The 25-key model is perfect for mobile producers and performers, and for those in tighter setups. 49- and 61-key versions are well suited for larger systems, and for those who want more keys and greater hands-on control with faders and fader buttons.

All Launchkey [MK3] controllers feature a full-size five-pin MIDI output, which works with any MIDI-compatible device. Novation Components can be used to configure MIDI parameter assignments of Launchkey’s knobs, faders and pads, to take control of anything MIDI. Launchkey [MK3] works standalone, so it’s the perfect controller for any music-making scenario, with or without a computer. The Scale and Chord Modes, arpeggiator, and Custom Modes — set up in Novation Components and stored on Launchkey — can all be used to control a whole studio or live rig.

For a deeper look at the Launchkey mk3 line, check out this playlist of Novation’s official demo videos: