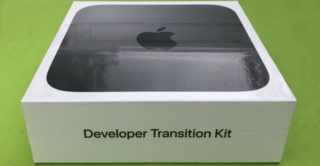 Apple‘s June 22nd announcement that it was dumping Intel CPU’s and moving the Macintosh to internally developed ‘Apple Silicon’ raised a lot of red flags for some readers.

While there are many valid concerns about issues like compatibility, speed bumps in the transition process and the ultimate loss of legacy applications, many readers also fundamentally questioned whether the chip designs that Apple has developed for over a decade to run iOS and its variants are powerful enough to run a ‘real OS’.

The first prototypes of Macs running Apple Silicon are now out in the wild, and speed tests are starting to appear that suggest that performance worries may be overblown.

Geekbench metrics of the prototype Apple Silicon Mac in Apple’s Developer Transition Kit show that a Mac with a repurposed iPad chip, running Geekbench in emulation mode via Rosetta, has better Multi-Core Geekbench performance than a 2020 Macbook Air running on an Intel Core i3 processor.

Geekbench is a cross-platform tool that’s designed to measure your device’s CPU and GPU Compute performance.

The Macbook Air is an entry-level machine, so, as a point of comparison, we checked benchmarks on one of Synthtopia’s Mac laptops, a 15-inch Late 2016 MacBook Pro. Geekbench stats show the Developer Kit Mac Mini beating our MacBook Pro in single-core performance and offering comparable Multi-Core performance:

Note that these are preliminary results. The Mac Mini computers included in Apple’s Developer Transition Kit are not intended to be production computers, and are arguably built with half-baked hardware.

For musicians, it remains to be seen how well Apple’s in-house chips scales up for higher-performance systems. High-end MacOS and Windows PCs blow away the Geekbench scores for typical laptops. For example, a current top-of-the-line MacBook Pro, with an Intel Core i9-9980HK running 8 cores, offers about twice the performance of the DTK Mac Mini.

But the fact that the first ‘Apple Silicon’ Mac performs as well as it does – running in emulation mode, on a chip repurposed from an iPad – bodes well for the ‘Apple Silicon’ switch.