The supremacy of hardware sequencers has been attributed to the fact that hardware sequencers are optimized for one purpose, while home computers are constantly doing hundreds of things. In a nutshell, while you’re trying to use your computer to sequence your synths, your computer may be juggling its attention between your sick grooves and doing bunch of other background tasks.

Recent tests by A. P. Matthews, though, suggest that your Mac – and even your iPhone – are now powerful enough to beat many hardware sequencers.

Matthews tested 10 different setups to see how accurately they sequenced a steady beat. He used 16th notes at 120 bpm, which means that the resulting notes should be consistently spaced 125ms apart.

He compared the devices in two main ways:

What he found may surprise you. 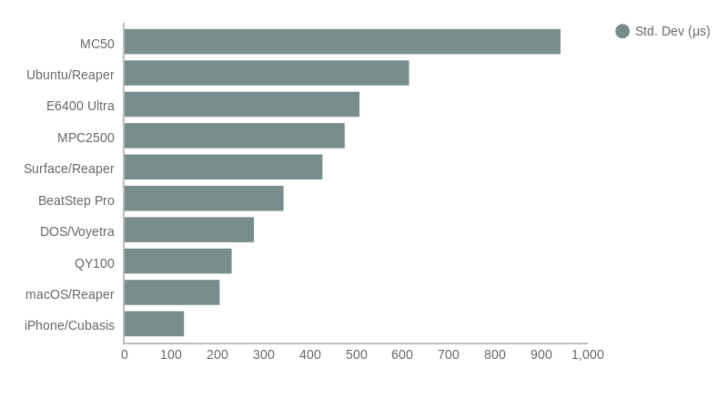 When comparing the standard deviation of the devices’ sequencing (above, lower is better), an iPhone running Cubasis was tighter than a BeatStep Pro, Akai MPC 2500 and Roland MC 50. A DOS machine running Voyetra Sequencer Plus Gold also did surprisingly well.

Of the hardware sequencers, the Yamaha QY100 performed the best.

When comparing the jitter – the range of deviation from the expected timing – macOS performed the best, followed closely by iOS.

Again, the Yamaha QY100 had the best performance of hardware solutions: 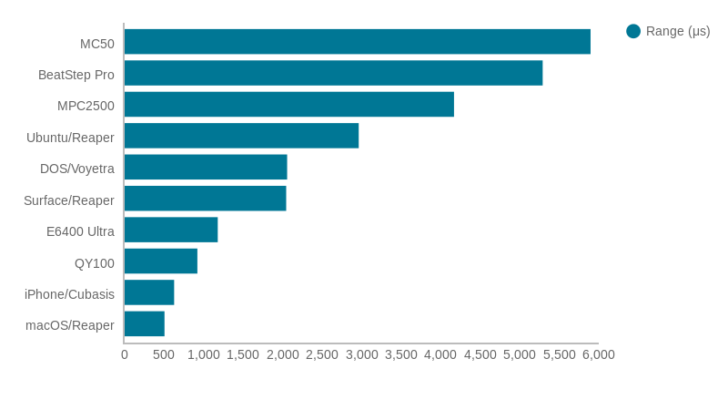 Here’s another way to visualize the ‘tightness’ of the devices that were tested.

The following chart shows the range of timing between notes sequenced by a Roland MC-50mk2:

Note that most of the sequenced notes were close to the expected 125ms apart. The center cluster is fairly wide, though, and there are also lots of notes that are timed earlier or later than what you’d expect.

The second chart, below, shows the range of timing for notes sequenced by the iPhone/Cubasis combination:

Note that most of the notes are very close to the expected 125ms timing, resulting in a tall, narrow distribution.

Details on each configuration are available with the test reports.

Is The iPhone The New Atari STe?

There are notable caveats to Matthews’ testing:

The testing also raises a lot of questions. How would a state-of-the-art Windows machine perform in the same test? How do different OS/software sequencer combinations compare? And would an Atari STe still beat them all?

While these tests don’t answer all of our questions, they demonstrate that modern macOS and iOS devices can sequence MIDI tighter than some popular hardware sequencers. And, based on these tests, it looks like MIDI performance is much less of a driver than it once was for choosing a hardware sequencer of a computer/software sequencer combo.

And, as always, if it meets your needs, it’s good.

Is the iPhone the new Atari STe? Let us know what you think of these tests and their results in the comments!

Computers are the most important thing to happen to musicians since the invention of cat-gut which was a long time ago.