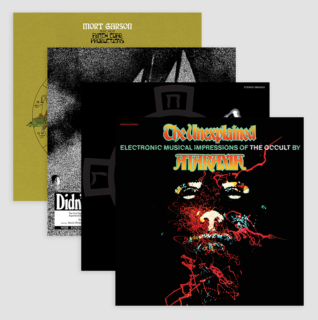 Sacred Bones Records has announced four new releases by the late synthesist Mort Garson, following up on their successful reissue of his Plantasia album.

Six years before the release of his landmark Mother Earth’s Plantasia LP, Garson met experimental film director Skip Sherwood, who was interested in an electronic score for his new movie, Didn’t You Hear?

Originally available only in the lobby of the theater at screenings of the movie in Seattle, the soundtrack LP went out of print shortly after the film’s release. It has been a sought-after record for collectors of Mort Garson and early electronic music ever since. The new release was taken from the original master tapes and given a pristine remaster by engineer Josh Bonati.

Originally released in 1971, Black Mass is Garson’s synthesizer interpretations of occult and esoteric phenomena, ranging from the Satanic black mass, to exorcism, to witchcraft, and beyond.

This deluxe remastered edition presents the album in full with all original liner notes.

Garson takes on supernatural phenomena with lush synth grooves on The Unexplained, his only release under the name Ataraxia.

This remastered edition marks the first official reissue of the album since its initial 1975 release, and it includes all the original liner notes.

Details are available at the Sacred Bones Records site.