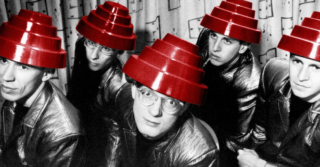 The Rock & Roll Hall of Fame Foundation today announced the Nominees for 2021 Induction, and the nominees include art synth pop group Devo.

While Devo is best known for their earworm Whip It and their ‘Energy Dome’ hats, their work goes a lot deeper and weirder.

They were about to call it quits before they made it big, but their 1976 film, In The Beginning Was The End: The Truth About De-Evolution, changed all that:

Soon they had a record deal and released their first album, Are We Not Men?, produced by Brian Eno, and were performing on Saturday Night Live.

To be eligible for nomination, an individual artist or band must have released its first commercial recording at least 25 years prior to the year of nomination.

Nominee ballots are sent to an international voting body of more than 1,000 artists, historians, and members of the music industry. Factors such as an artist’s musical influence on other artists, length and depth of career and the body of work, innovation and superiority in style and technique are taken into consideration.

Inductees will be announced in May 2021. The Rock & Roll Hall of Fame 2021 Induction Ceremony will take place in Cleveland, Ohio this fall.

28 thoughts on “Devo Nominated To Rock & Roll Hall Of Fame”