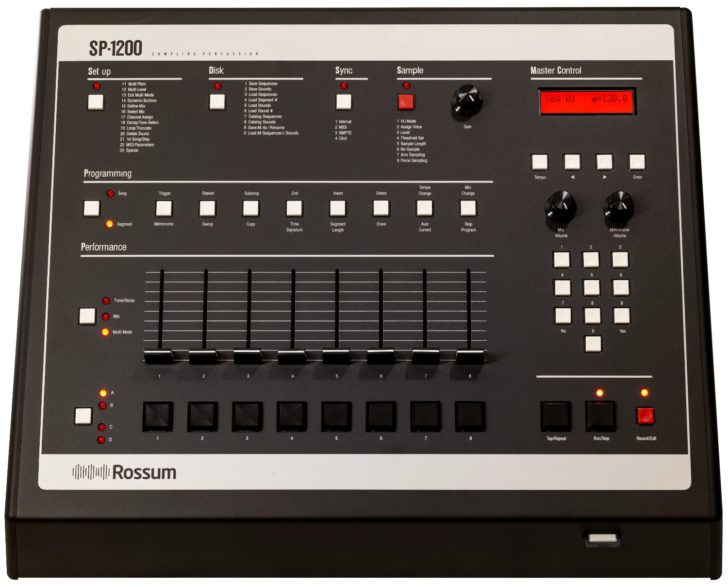 The Rossum SP-1200 reissue is engineered by the original designer and built and tested in the United States to his standards.

E-mu Systems co-founder and original SP-12 and SP-1200 designer Dave Rossum has duplicated the original analog and digital electronics of the landmark 12-bit drum machine sampler as closely as possible. As a result, Rossum was able to, with very few exceptions, use the same components used in the original. Rossum also took care to maintain the circuit board layouts of the original.

The original lines and shape of the original SP-1200’s structural foam plastic housing have been closely recreated with finely-textured, black powder-coated steel panels joined with bead-blasted, anodized aluminum black side/end caps. The SP-1200 panel legends are reproduced in high-contrast metallic ink across the top and rear steel panels. The placement and spacing of all original controls have been maintained exactly in the reissue.

The Rossum SP-1200 maintains exactly the same 12-bit linear data format and 26.04 kHz sampling rate as all vintage SP-12 and SP-1200 units. As a result, the unique character of SP-1200’s original pitch shifting and its audible aliasing and imaging artifacts are preserved identically.

New Features Of The Reissue

Changes and enhancements were made where they were compatible with the original design and classic sound.

Sampling memory has been expanded to the maximum capability of the original sound engine. An all-new memory card storage solution with new functions is seamlessly integrated into the operating system. This is designed to let you easily save, rename, and delete files and folders, and supports importing vintage SP-1200 disk images packaged in the popular .HFE format.

The Rossum SP-1200 also uses an updated version of the original’s software. A 3.5” “floppy” disk, containing modified software for original vintage SP-1200 units, adds a new Set-up Special function, allowing users to transfer all sounds and sequences from an original SP-1200 to the Rossum SP-1200 reissue over a standard MIDI cable. Whether using 3.5” disks or the popular floppy drive emulator modification, users of classic SP-1200 units are able to recall and remix their work on the SP-1200 reissue.

On the rear panel of the unit, users will find new dedicated jacks for filtered and unfiltered channel outputs, as well as a new sample input monitor feature.

Four sliders allow users to tune the initial cutoff frequency and the resonance of the SSI2144 analog dynamic filters on channels 1 and 2.

The SP-1200 reissue features dedicated TRS jacks for balanced audio output on dedicated jacks for each of the filtered and unfiltered outputs as well as the mix output. Connecting a mono unbalanced (TS) duplicates the original SP-1200 output, with the original output impedance.

Rather than the fluorescent-illuminated backlight included with the first original SP-12 units, the classic 2-line, 16-character display is backlit using RGB LEDs, inspired by the LED-lit backlight displays equipped in later SP-1200 units. A new Set-up Special Function (#26) integrated into the Rossum SP-1200 reissue’s operating system allows users to adjust the brightness and color of the backlight.

SP-1200’s black play buttons use custom replica button caps and durable, low-resistance switches, chosen for their ideal travel and rated to keep their same feel for years. Dynamics can be performed using exactly the same classic technology invented specifically for SP-12 in 1984, and is faithfully maintained in the reissue.

As with all SP-12 instruments, the dynamics can be optionally disabled (Set-up 14) and Multi-Level mode is featured, allowing any dynamics to be performed with a lighter touch.

When the Disk module is activated, users can choose files and folders from the memory card using the arrow keys and the LCD. The Disk module functions for formatting and copying software to magnetic media have been replaced with Save All As / Rename.

For the first time, musicians can save SP-1200 sounds and sequences in one step and delete and rename files and folders using its built-in display. Importing vintage SP-1200 disk images packaged in the popular .HFE format works frictionlessly, just like regular loading. A 3.5” disk containing modified software for original vintage SP-1200 units adds a new Set-up Special function allowing users to transfer all sounds and sequences from an original SP-1200 to the Rossum SP-1200 Reissue over a standard MIDI cable. Whether using 3.5” disks or the popular floppy drive emulator modification, users of classic SP-1200 units are able to recall and remix their work on the SP-1200 Reissue.

Designed by Dave Rossum in 1984, the original sound engine at the heart of SP-12 and SP-1200 could accommodate up to 20 seconds sampling time, but 20th-century prices of the random-access memory (RAM) proved cost-prohibitive, preventing more memory from being integrated during the original production run.

One of the unobtainable parts featured in the original SP-1200 is the SSM2044 analog filter, a classic integrated circuit designed by Dave Rossum in the early 80s. In partnership with Sound Semiconductor, Inc, Dave has designed the SSI2144 IC, which recreates the analog circuit using contemporary IC processing and packaging, preserving its unique character.

The SP-1200 reissue also features a new power supply and newly-constructed, four-layer circuit boards that lower the noise floor and avoid undesirable hums, without compromising the unique artifacts and dynamics of original SP-12 series instruments. The rear panel runs cool to the touch, and no vents are necessary in the rear panel.