The VIRAM Octopus is based on the idea of Euclidean Rhythms, which are described by Godfried Toussaint in his 2005 paper, The Euclidean Algorithm Generates Traditional Musical Rhythms.

Euclidean Rhythms distribute beats over a series of steps as equally as possible. For example, distributing 4 beats over 16 steps equally gives you the standard “four on the floor” rhythm. Euclidean Rhythms tend to make sense musically because of the physics of playing percussion instruments. 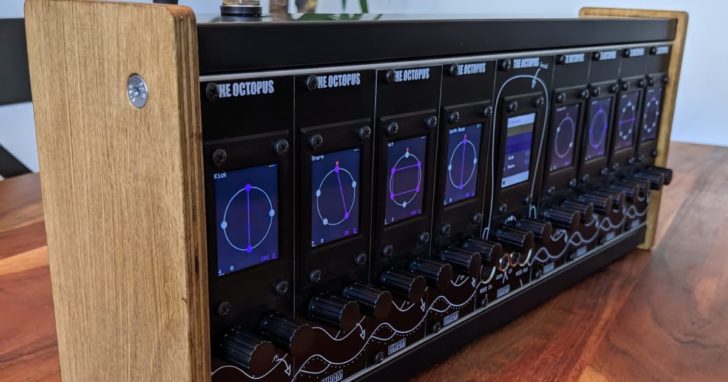 The Octopus offers features to help make these algorithmically-generated beats more interesting, by allowing you to use a differing number of beats in each of its 8 modules, rotating patterns, customizing and randomizing velocities and timings, and more.

In addition to beats, the Octopus lets you create melodic progressions by triggering chord notes. Several modes are available to let you add variations, manipulate melodies and interact with the Octopus sequencer in real time.

Ratza plans to launch the Octopus later in 2022. See the VIRAM site for details.