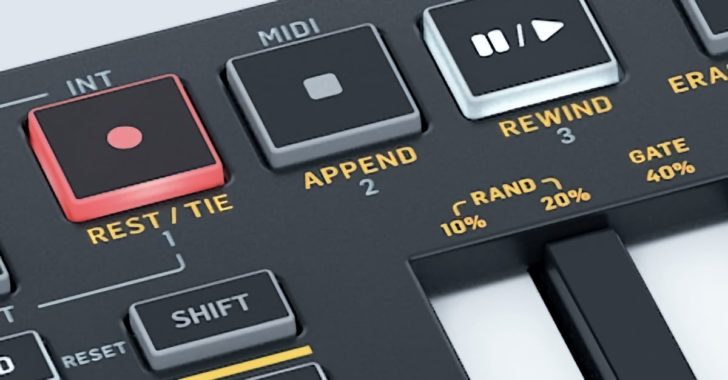 Can a knockoff of a knockoff be so derivative that it actually becomes something new?

That’s the question raised by CME today, with their introduction of the SWIDI – a wireless MIDI keyboard controller that they say is “inspired by Behringer”.

Last year, Behringer notoriously introduced the SWING, a MIDI keyboard controller that was such a close copy of the Arturia Keystep that Behringer had to defend it on their site.

In their statement, Behringer said that copying other company’s products as closely as legally possible is the core of their ‘market follower’ business strategy, arguing that this type of competition is good for the industry.

Content Alert: This is where some readers’ heads may explode.

Now, the CME SWIDI is being introduced as ‘inspired by’ the Behringer SWING. If you look closely, you may see some similarities between the two products:

Or you might think that the SWIDI can’t be a knockoff of the SWING, because a copy of a copy is actually, itself, a copy of the original. In other words, CME’s copy validates Behringer’s perspective that copying is good for competition.

But here’s where things start to get interesting….

What makes the CME SWIDI interesting is that it’s not just a copy of a copy. It does things that neither the Behringer Swing or the Arturia Keystep can do.

CME are known for their wireless MIDI products and inexpensive expressive MIDI controllers. With the SWIDI, CME is riffing on the SWING, reimagining the wired mini keyboard controller & sequencer as a completely wireless device.

Unlike its predecessors, the CME SWIDI supports low-latency Bluetooth MIDI connectivity. The SWIDI is designed to control your hardware and software MIDI devices, but without the need for MIDI cables or power cords.

CME says that there’s “no component shortage” to delay production of the SWIDI, and that it will be priced 20% less than the Behringer SWING.

96 thoughts on “Behringer Gets Knocked Off By CME, Who Says They Have ‘No Component Shortage’”

HOW THE HELL IS SUDAFED LEGAL?