Sonicware has launched a Kickstarter project to fund production of their new SmplTrek portable production sampler.

SmplTrek is a portable sampler and music production system that lets you record sounds with the built-in microphone, your microphone, electric guitar connected to the input, or even a USB-connected smartphone or PC/Mac.

Sounds can be recorded with or without effects, edited, and then quickly assigned to pads for sequencing. Once you have created the samples you want, you can use them to build complete songs. 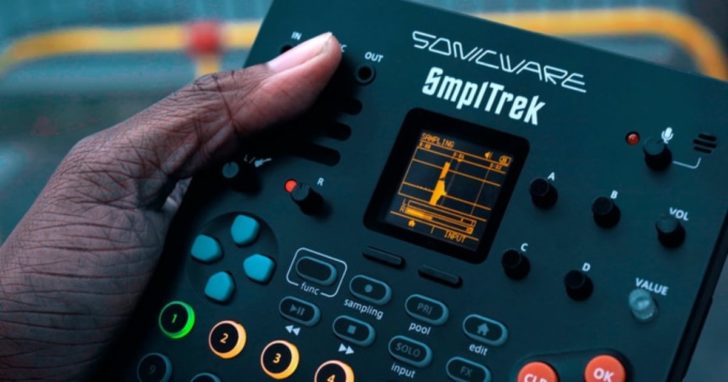 Each song project has 16 sequential parts called “Scenes”. Each Scene has 10 sequencer tracks which can behave in different ways, as described below:

Three additional Global Audio Tracks are available for longer recordings like vocals and external instruments. These tracks can record multiple takes which can be spliced into a final perfect version. Traditional “punch-in” style recording is also supported.

More than 500 samples and over 100 drums kits are included internally, so you can get started right away.

Production of the SmplTrek is being funded via a Kickstarter project, and it’s available to project backers for about $291.

Note: Crowdfunded projects involve risk, so make sure you read the project details.