Behringer today introduced the AKS Mini, a new mini synth in their ‘Soul’ format that they say is “a scaled down version of the VCS3, but with the exact same oscillators, filters etc. and of course the magic sound.” 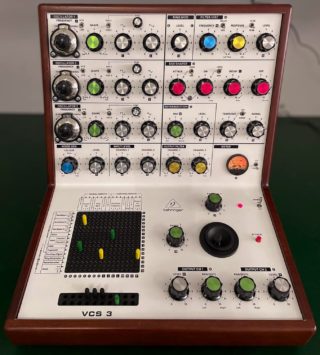 Behringer has also announced a Synthi VCS 3 knockoff, right, which is full-size, and copies the original design closely. They’ve tagged several of their upcoming synths as #hardvaporware, because the company has completed prototypes, but they say they are waiting to put the synths into production until they can get production-scale quantities of the necessary electrical components.

Behringer recently introduced a line of Soul synths that are scaled and priced to be a cheaper alternative to the Korg Volca line. While the Volcas are original synth designs, the Soul series are all marketed as miniature copies of classic synths. They include:

The Behringer AKS Mini is expected to be priced at $99, with availability still to be announced once the company can get enough parts to put the synth into production.

50 thoughts on “Behringer Announces $99 AKS Mini, A Synthi AKS VCS3 For Your Pocket”