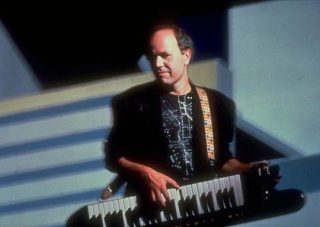 Jan Hammer is a multi-talented musician and composer who has achieved success as a jazz-rock artist, composer, and electronic music innovator.

His career has spanned over three decades, and with each decade he has successfully reinvented his music. In the sixties, he worked as a keyboardist and conductor with jazz great Sarah Vaughan. In the seventies, his career took off, as a member of the pioneering jazz-rock group, Mahvishnu Orchestra, collaborations, and solo albums. In the eighties, he moved into soundtrack work. He created the score for Miami Vice, getting a number 1 instrumental hit and revolutionizing television scoring in the process. In the nineties he scored movies and video projects like the computer animation hit Beyond the Mind’s Eye.

We spoke with Hammer recently about his career, his music, Miami Vice and more:

Synthtopia: Jan, your career spans over three decades, and you’ve managed to have success in styles ranging from straight-ahead jazz, to fusion to soundtracks. When you look at the jazz work you did with Sarah Vaughan, that’s completely different than your later work! How do you explain that progression?

Jan Hammer:  It’s just something that happened naturally. My thought process is not that involved…the process is organic. Music grows and fades in its influence and popularity, and also in my interest. It started with jazz and classical music. Obviously, the electronic rock had an influence on me also. You keep your ears open to new sounds.

Synthtopia: And this led to your fusion work with Mahavishnu Orchestra?

Jan Hammer:  Jazz-rock is a better name for it. We didn’t call it fusion….fusion sort of describes the left-overs, the music that came later. When Mahavishnu was happening, it was like a stroke of lightning! People weren’t sure what to call it, because it was basically an instrumental rock group, with a heavy improvisational element.

Synthtopia: What made you want to go in the jazz-rock direction?

Jan Hammer:  I knew I had to do that! With traditional jazz, I felt that I had been there, done that. You have to keep evolving to keep things interesting. Old-school jazz reached a point where it sort of circled back upon itself.

We were just bouncing off each other. The things I did at that time just sounded the most attractive to me.

Synthtopia: Your music from that era often gets lumped into the fusion category. Have categories been a problem for you, since your music is so diverse?

Jan Hammer:  Yeah. Especially after the Mahavishnu Orchestra, people wanted to lump my work into the fusion category. We would be on the road with my group doing more rock-oriented music, and we’d put out a record and it would get put into the jazz category. People would go into stores, look in the rock section and they couldn’t find my records! 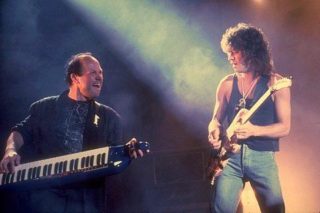 Synthtopia: Ever since your work with Mahavishnu, you’ve played with a series of great guitarists. What makes this work?

Jan Hammer:  I think that they hear something in my playing that they can bounce off. It’s sort of an inverted guitar approach…it complements their playing.

You would overlap too much if you had two guitarists. The way the notes come together on a keyboard are just different than on a guitar, too.

Synthtopia: Your playing sounds so guitar-like, much of the time. Do you treat your keyboard differently when playing with a guitarist?

Jan Hammer: When playing against a guitarist, I don’t get into a full guitar sound.

Synthtopia: What is it about your playing that makes the keyboard and guitar combination work so well?

Jan Hammer:  It has this otherworldy sound….the people that could use this had something to work with. Jeff Beck completely got what I do, and built on it. We would come together and pieces just came into place naturally. Many people don’t realize this, but I was pushing more to rock, and he was pushing more towards improvisation.

Synthtopia: Your debut album, The First Seven Days, stands out from that period. It’s innovative in so many ways, musically and the way you recorded most of the parts yourself. What was the inspiration behind it?

Jan Hammer:  I felt compelled. It came out of the pressure cooker of Mahavishnu…it was necessary after Mahavishnu!

The music on The First Seven Days was moody and spiritual. The music was closer to classical than jazz. I was surprised how people kept looking at it from a jazz view. It’s not jazz,; at least, I can’t hear that. I think it’s because it has a lot of improvisation. But even Indian classical music is 90% improvisation.

Synthtopia: Speaking of Indian music, I was surprised recently when I read that you don’t listen to much contemporary music, but mainly to Miles Davis and Indian music.

Jan Hammer:  The peak of jazz was 1965-1966 and the music of Miles Davis. That was the peak of jazz improvisation to my ears. But even if I’m not listening to it, that music is so deep in me that it’s a part of my playing.

Synthtopia: You’ve remastered and released The First Seven Days on CD. Are you planning on releasing any of your other older albums as CDs?

One of the hardest things is getting ahold of the masters. All these masters ended up with various record companies. One record company would go out of business or be bought by another, so I don’t always knows who owns the masters. Then they often aren’t interested in putting it out. 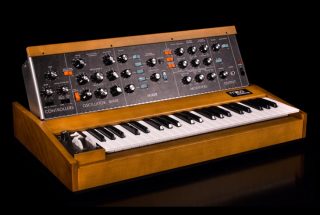 Jan Hammer:  It was a need for unique voice. I knew I wasn’t going to be able to take the piano where I wanted to go. I kept searching for this. I used to run my keyboards through electronic boxes, like a ring modulator, trying to get a unique sound.

When I got my hands on a Minimoog, I thought “I know what to do with this!”

The sound can remind you of a clarinet, a flute, or a sitar. It’s the fact that it bends and flows.

Synthtopia: You developed a unique style with the pitch wheel.

Jan Hammer:  People should have a license to use the pitch wheel!

When I first got a Minimoog, the pitch bend was set to be a fourth. Eventually I got it adjusted to where I want it. Some people can get by with pitch bend set to two semitones, but you can not express the creativity that I look for with two semitones.

You have to be coordinated, and listen, using your ear like a violinist does.

Synthtopia: Did you have trouble with the early Minimoogs?

Jan Hammer:  When I was on tour, they would sometimes start to go out of tune. They had these circuit boards in them that would start to slip out of their sockets, and then they’d drift out of tune. All you had to do was smack the thing on the bottom, and that would take care of it!

Now I use a Korg Triton Extreme, and the way things have evolved, I can do everything I want with it.

Synthtopia: Do you still run it through outboard effect to get the sound you want?

Jan Hammer:  The on-board processing is so good, that I’m perfectly happy working with sampled sounds, using the internal effects. The Triton even has a built-in tube, which I love, because it sounds great.

Synthtopia: Any other favorite gear, besides the Korg?

Jan Hammer:  I still use Opcode Studio Vision, after five years. It was murdered by Gibson!

It’s still the most logical MIDI-integrated sequencer. As far as the MIDI part, Studio Vision is still my favorite. I’ve got a Mac set aside that runs System 9.2. It’s completely stable, it all works. There’s no reason it won’t work for another ten years.

Synthtopia: How did Miami Vice come together for you? I understand that you played some work for Michael Mann and it blew him away.

Jan Hammer:  The thing I played for Michael Mann was the Miami Vice theme. It was something that I was working on using the Fairlight CMI. I was experimenting with the sequencer, trying to get something really rhythmic and driving. That was written before I met him.

Synthtopia: What was it like scoring an episode in 4 days?

Jan Hammer:  It was very intense. The thing that made it work is that I was given complete artistic freedom. I was not locked into a “Miami Vice” sound.

There were weeks when the music was afro-Cuban, jazz, then experimental electronic, even flat out rocking. There was no need to worry about consistency. Every week was different. I could respond to the songs that were placed in the show. When the score came out of the song, sometimes they almost blended together.

Synthtopia: The music was a big part of the shows success, and the music was quite successful too. You’ve put out several albums of the music…

Jan Hammer:  Actually, more like six. There were three official albums. I put out more on the Escape from Television album. Snapshots had more. The Complete Collection had two CDs. The first CD had the twenty tunes that had come out over the last 6 years. The second CD had tracks that had never been released before.

Synthtopia: What’s on the new CD?

Synthtopia: How did you go about making the CD tracks? Wasn’t a lot of this music queues that might not have real beginnings or endings?

Synthtopia: How much of it is new?

Jan Hammer:  In an episode, there were often several versions of theme played at different points. I was able to take these and put them together to make the songs.

Synthtopia: Did you have any idea that Miami Vice would be such a big hit?

Jan Hammer:  When it first went on, I thought that it might be a popular show, but it really took off. The Theme went on to hit number one. Over the years, the music has taken on a life of its own.

Synthtopia: Does the Internet have an effect on you as a musician?

Jan Hammer:  Well it’s great to have a web site. It’s such a good feeling. My son, Paul, has a web site, PaulHammer.com, and I can go anywhere and tell someone the web site name and they can go out and find it. That was impossible ten years ago.

Synthtopia: We’ve talked a lot about your career, and you’ve had a lot of successes over your career. Is there any work that you think didn’t get the attention it deserved?

Jan Hammer:  I don’t know….I think generally that the best work naturally comes to the top.

There are individual songs on certain albums, though. For example, there are some things on the album with Neil Schon, Untold Passion, that could have been hits. They got overlooked because the record company wanted to keep Journey happy, and didn’t want anything competing with them. The net result was that some great tunes were overlooked.

Synthtopia: Jan, thanks for taking the time to speak with Synthtopia!