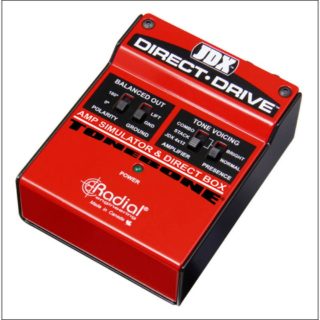 Radial Engineering has introduced the Radial JDX, a new type of direct box that connects between the guitar amplifier head and the speaker cabinet to capture the direct sound of the guitar amplifier. Designed for both live and studio use, the Radial JDX may be used alone or combined with a microphone as it is equipped with a variable 0 degree to 180 degree phase control that allows the engineer to align the mic’d and direct signals for optimum performance.

According to company president Peter Janis: “The Radial JDX is one of the boxes that should have been invented a long time ago. Just put your ear next to a 12″ speaker playing at 100 watts and listen: you will find that the tone of the amp does not come from one speaker, but from the combination of the speakers, the box and the room. This is why studios generally set up several microphones in a room and spend a ton of time moving the mics until they find the sweet spot. For live engineers, the problem is multiplied, as stage setups are never the same, the acoustics change nightly as the band moves from room to room, and simply moving the microphone by a few inches will cause a phase shift to the tone as the mic picks up sound from two adjacent speakers.”

“The Radial JDX is absolutely invisible to the guitarist whereby it simply taps the signal after the amp head and sends a direct signal to the mix position. The high quality Class-A circuit coupled with the way the JDX actually senses and reproduces the back-emf from the speaker cabinet, produces a tone reminiscent of a high quality large diaphragm German condenser in front of the cabinet. A simple phase control allows the engineer to then combine the mic’d sound with the JDX direct sound and time-align them so that they work in unison. The benefits are many: to begin, the engineer can now compare the tone of the mic’d and direct signals and decide which sounds best. When setup time and sound check is limited, he can set the direct sound, knowing full well that the room acoustics or noise levels on stage will not affect his direct feed. This way he can better predict the sound of the performance. Best of all, because he can combine the two sources, he can get more definition from the direct sound and maybe more body from the mic’d source to create a more truthful rendering.”

The Radial JDX is connected using a choice of either a -10dB line level feel or insertion between the guitar amplifier head and the cabinet. Note that the JDX is not a load box. Front panel controls include phase shift bypass and 0 degree to 180 deg. variable phase shift potentiometer to time-align the direct and mic’d sources. This is supplemented with a polarity reverse (absolute 180 degree phase) on the output to provide full 360 degree time shift. A low-pass shelving EQ with choice of 500Hz or 1kHz cut-off frequency is provided for pre-console equalization and designed to cut offensive high frequency noise and hiss while better approximating the roll-off characteristics of a typical 12″ speaker driver.

All circuitry inside the Radial JDX is 100% discreet Class-A. To eliminate noise and hum caused by ground loops, the signal is transformer-isolated and supported with both input and output ground lift options. This way, the guitar technician can structure the best grounding scheme for the stage setup. TheJDX comes equipped with a 15VDC power supply.