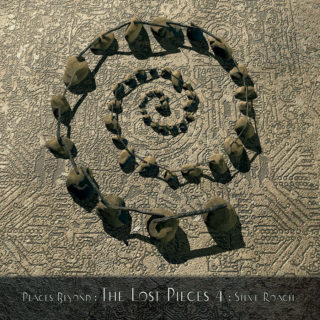 Steve Roach is one of the most prolific ambient/space music artists. His pace exceeds the traditional music industry release rate, so he releases his work on several labels, including his own Timeroom Editions.

Working at this rapid pace results in some music that doesn’t fit neatly into a preconceived album concept. To get this music heard, Roach has released several collections of “lost pieces”, bringing together works that are not parts of complete works, but are nevertheless complete themselves.

Places Beyond is the fourth release in this series. It would be easy to be sceptical about a release like this. By the fourth one, how good can these “extras” be?

Surprisingly good, actually. Places Beyond doesn’t provide the coherent listening experience of CDs like Mystic Chords or World’s Edge. On the other hand, the pieces are woven together in more subtle ways through the sounds choices and approaches that make up Roach’s style.

The pieces on Places Beyond are from 1997 to 2004, and listeners may hear echoes of some of his recent CDs. The result is an interesting record that provides both an introduction to the many flavors of his recent music, and a collection of great tracks for hardcore Roach fans.

Trancefusion & Serpents Birth are rhythmic collaborations with synthesist/percussionist Vir Unis. The tracks have a darker feel, but also have a real drive to them because of the way they combine sequences and looped and live percussion.

Resolution Point seems to mix many facets of Roach’s work. Roach frequently uses sounds that evolve and change very slowly over time, and these are prominent here. Shamanic percussion sounds and even ambient guitar are woven in, too. Towards the end, the track moves into the abstract drone soundscapes that Roach has explored more frequently in recent years.

Calm Before the Storm is another collaboration, this time with Vidna Obmana. Obmana and Roach work with evolving synth strings, percussion and natural sounds, creating a ambient soundscape that may immerse some listeners in another world, and attune other listeners to the sounds around them.

Slow Rapture & Light of Day return listeners to the territory Roach created on Mystic Chords or The Magnificent Void. Roach’s music in this style can leave reviewers tongue-tied, because it pushes the limits of what many people would consider music. The tracks are free of any clear harmonic progression, melody and rhythms, making discussing them a little bit like dancing about architecture. To these ears, Roach is echoing the rise and fall of sounds in natural landscapes. These electronic soundscapes explore constantly shifting textures within set palette of sounds, similar to the constant change of the natural sounds of the wind or insect drones.

In his liner notes, Roach says that Contained..Sustained combines two impressions of the desert, from different time periods. There’s no explicit “desert” sounds here, but it echoes his desert-themed music going back as far as his Western Spaces release.

Steve Roach’s Places Beyond CD is an interesting collection of ambient/space music that would be a good introduction to his recent work for anyone unfamiliar with his releases of the last few years. Even though ambient music has almost become a mainstream genre, there are still very few artists doing any thoughtful work in this area. Roach is one of them, and on Distant Signal he showcases his unique ear for creating landscapes of sound.