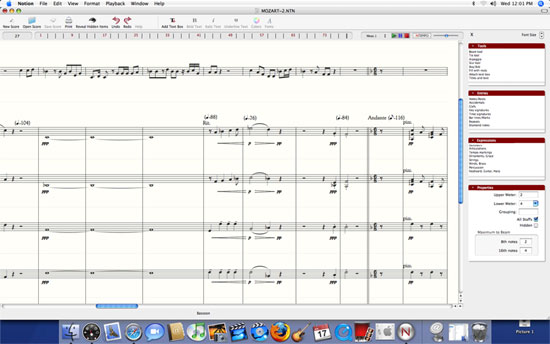 Among the new scoring features in Notion 1.6 are support for lyrics, chord symbol entry and playback, special note entry (x, triangle, and slash), and forced “page-turns” as well as improvements to tempo markings, beaming, ties, tuplets, and overall rendering of score appearance. The handling of repeats has been improved as well as NOTION’s ability to read and interpret articulations and imported data.

Notion is designed for students, composers, and musicians on all levels as a tool for composition, learning, practice, and live performance. It combines a full-featured music notation system with interpretive algorithms linked to a proprietary playback engine that offers samples of thou¬sands of individual notes and articulations played by the London Symphony Orchestra and recorded at Abbey Road Studios.