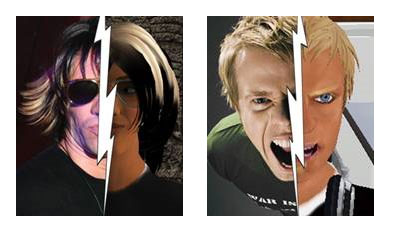 On February 27, club and DJ culture will be brought to a boil in the online virtual world of Second Life as The Scumfrog opens the doors to his spectacular new virtual club “Glam Scum”.

The will be joined by international heavyweight Ferry Corsten for the grand opening on the 27th. Both DJs will be in the club in avatar form in real time, so that anyone on the dancefloor can chat with them while they play; a rare privilege in real life clubs. The event starts at 5pm E.S.T./2pm P.S.T.

The opening will mark the second event with marquee-name DJs in Second Life. The first happened when The Scumfrog (aka Jesse Houk) opened his virtual 24-hour party island Skyros to the public. DJ Rap, D:Fuse, Richard Vission and Static Revenger also joined in the lineup.

All that’s needed to join Second Life and get to Skyros is to download the software from www.secondlife.com and register as a citizen. There is a SLURL (Second Life URL) on www.thescumfrog.com that automatically launches the software and teleports your newly created avatar straight to the virtual island.