“You were mother-something ruthless baby,
A jack-the-ripper in high-healed shoes
You cut me like a razor blade
And still I can’t get over you” 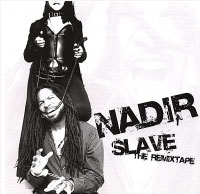 Nadir also recently sent us a copy of his Slave: The Remixtape, which is a CD compilation of remixes of Slave. It’s a fantastic example of what remixers can do when given good material.

The remixes take the original into completely new territory. Discoslave is a full-on house remix; the Distorted Soul Rock Radio edit has more of a classic rock feel; the Power X-Change Flip version turns it into a trance/techno number; the Hip-Hop Radio Edit strips it down and adds a rap; and the Covert Ops Mix takes it into minimal techno territory.

If you’re into remixes, Nadir’s Slave: The Remixtape is a tour-de-force of remixing.