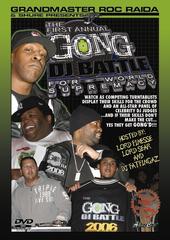 Hosted by Stanton and DJ Roc Raida, the Gong Battles offer DJs a chance to compete in an informal atmosphere with an emphasis on fun, entertainment, and true undiscovered skill. The competition is open to anyone.

Raida’s Gong Battle was inspired by the 70’s TV program, The Gong Show, which featured amateur performers placed before a panel of judges, who could gong a bad performer, preventing them from moving onto the next round. Roc Raida and Stanton’s Gong Battle offers aspiring DJs a similar opportunity.

In Gong Battle, spectators can gong a DJ they don’t think he or she deserves to move on to the next round. Eventually one winner will be crowned.

The 2007 Gong Battle series will kick off on Saturday, March 24th on South Beach at the Remix Hotel Miami, part of this year’s Winter Music Conference. Additional Battles will take place in Baltimore on April 5th at Sonar Night Club, in New York on April 12th at S.O.B. Night Club, and in Los Angeles on April 27th at the Scratch Academy. Admission is free for all events.