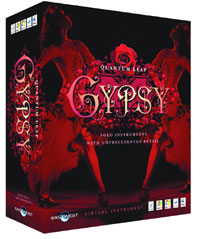 “All of the guitars were sampled with up and down strokes, many velocities and picking styles, various picking angles, release trails, chords and effects,” states Quantum Leap Gypsy producer Nick Phoenix. “Gypsy’s guitars, played by top Los Angeles session guitarist David Kole, simply have to be heard to be believed.”

The violin and trombone feature many articulations, repetitions and even true legato intervals. The trombone in Quantum Leap Gypsy was recorded in EASTWEST Studio 1 (formerly United-Western Studios) in Hollywood California, referred to by many engineers as “the best brass room on the planet.”

The accordions feature multiple setups, all with air flow in and out samples as well as expressive samples, chords and left-hand bass. True to its name, Gypsy also features a gypsy percussion program and extensive flamenco dancers’ foot stomps, as well as traditional castanets.