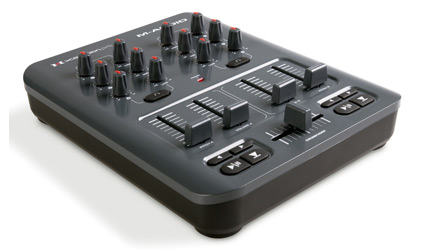 M-Audio has announce that its X-Session Pro MIDI controller now ships with Torq LE software, a streamlined version of the company’s popular Torq software for DJs.

Torq LE software includes many of the same features as the Torq application that is revolutionizing the world of digital DJing. Torq LE lets users mix digital audio files—including MP3, AIFF, WAV, WMA and AAC formats—that reside on their computer’s hard drive. It provides easy access to these files through a quickly searchable database that can even interface with the user’s Apple iTunes library. Torq LE can also play songs directly from iPod music players, as well as record to an audio file for podcasting or CD burning.

The configuration and features of the Torq LE software parallel both traditional DJ setups and the controls on the X-Session Pro hardware controller. This powerful yet easy-to-use application has two virtual decks for cueing and mixing, complete with independent control of speed and pitch. Automatic beat-detection and synchronization allow for effortless beat-matching.

Torq LE software also features an integrated two-channel mixer with three-band EQs, level controls and three audio effects for each channel—all of which automatically map to the controls on the X-Session Pro. Headphone cueing, a large scrolling waveform display and a crossfader round out a formidable package. Torq LE works instantly with the X-Session Pro controller, ensuring seamless setup.

“Our Torq software has transformed the landscape of digital DJing,” says Adam Castillo, marketing director at M-Audio. “Torq LE delivers many of the same features and integrates perfectly with the X-Session Pro. The X-Session Pro is already a popular controller choice for artists working with a variety of music software. Now, the inclusion of Torq LE makes it a great solution right out of the box.”

In addition to shipping with new X-Session Pro controllers from this time forward, existing registered owners of X-Session Pro are eligible for a free Torq LE download from www.M-Audio.com/TorqLE.