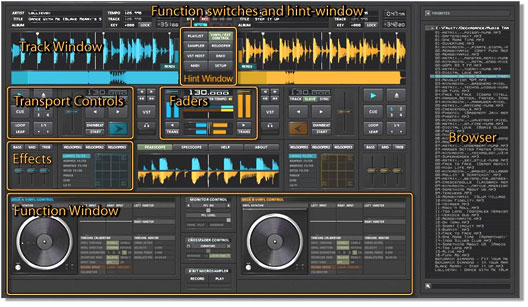 Image Line Software, the creators of software such as FL Studio / Fruityloops, has announced the release of Deckadance, a DJ mixing application in which creative DJ performance is the key design philosophy. Deckadance can be controlled using most (if not all) existing midi controllers and time-coded vinyl and CD systems.

Deckadance works either as a standalone program or as a VSTi plugin inside a VST host. Deckadance can also host any VST-compliant softsynth or effect.

Argu, the Deckadance lead developer says: “Being both a DJ and software developer has given me a unique perspective to the development of Deckadance and has included lots of real-world practical testing that influenced the design and development process. I believe this approach has resulted in sophisticated and user-friendly performance features that will satisfy the most demanding DJs.”

Deckadance is available through the end of May as a download for US $149. Regular retail pricing will be US $179. A demo version is available.

Midi control – Deckadance comes with pre-configured setups for working with the Vestax VCI-100, Behringer (BCD2000 & 3000), Allen & Heath Xone:3D, M-Audio XSession, Hercules DJ Console (MP3 & MK II), EKS XP10 , Kontrol-DJ. All other controllers will work in Generic mode or via custom links which can be made with the MIDI learn feature and saved for future recall.

Vinyl control – The following Time Code Vinyls and CDs have been certified to work with Deckadance – Stanton FinalScratch, Serato Scratch Live, MixVibes, and msPinky. All other vinyls and timecode CDs can be ‘learnt’ using the inbuilt Deckadance Time Code calibration system.

Sampler – Eight integrated sampler banks can load or record 1, 2, 4 or 8 beat loops from one of the decks (freely assignable). Samples can be triggered on-the-fly or beat-synced with the associated deck.

ReLooping – The Deckadance Relooper features the ability to re-slice any beat-analyzed track and re-arrange the beat. The Relooper includes a set of master effects for added customization of the sound and can be used to create stutter effects, or to extend infinite parts of a track to create unique breaks, intros or outros. The Relooper also supports unique loop and leap features which allow the track to continue from the point it would have reached if no loop had occurred.

VST host – Deckadance can host eight VST instruments or effects. These can be assigned to either deck, and are located in the signal path between the decks and the master outputs. Instruments may be driven by MIDI sequences to create unique live sequenced tracks. Included with Deckadance are the Image-Line JuicePack effects including: Love Philter, Parametric EQ & EQ2, Wave Candy, Multiband Compressor, Delay, Delay Bank, WaveShaper, EQUO (graphic morphing EQ), Flangus, Vocoder, Spectroman and Stereo Enhancer plugins.

VSTi plugin – Deckadance can be loaded as a VST inside any VST-compliant host, such as FL Studio, Ableton Live, Sonar or Cubase.

Playlist – Working with the integrated file browser, the Playlist allows sets to be arranged and tested before the gig, including cue points, loops and beat-markers. Complete with ‘DJ-Style Automix’ function (using Bass crossfades) even the laziest of DJs, or those who need to visit the bathroom, are catered for!

DMX – Digital Multiplex lighting control standard is a communications protocol, similar to MIDI. However, DMX may be used to control lighting, dimmers and other DMX-enabled equipment such as fog-machines. The Deckadance DMX Sequencer is an optional module to be released soon.

Skins – Deckadance ships with a Dark and Light skin. The skin bitmaps are freely editable so users can create or customize their own. New skins will also be downloadable from the Deckadance website shortly.