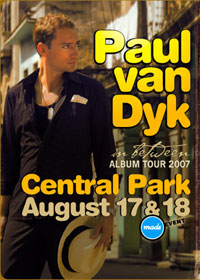 Superstar DJ Paul van Dyk plans to return to Central Park on August 17th & 18th – a record 5th consecutive year. Last year, over 10,000 fans from around the world descended upon New York to see van Dyk in this surreal environment.

In celebration of the anniversary, innovators Paul van Dyk and organizers Made Event will offer a special limited edition version of his upcoming artist album In Between (out August 14th on Mute Records). Fans who attend the Central Park concerts will have an opportunity to purchase combination special ticket packages, with the CD available for pickup only at Central Park.

From it’s inception in 2003 what began as a one time, late afternoon event has transformed into a 2-day concert extravaganza. Paul van Dyk’s incomparable DJ style ensures that no two concerts are ever the same due in part to his one-of-a-kind rig that has taken the art of DJing to an entirely new level.