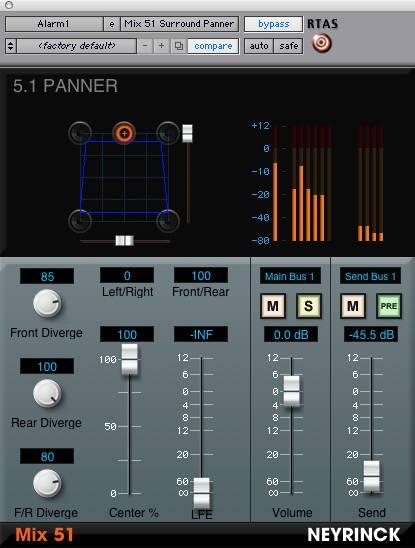 Mix 51 is a set of 5.1 surround panning and mixing RTAS plug-ins that allow you to take advantage of any Pro Tools system with six or more outputs such as Mbox 2 Pro, Digi 002/003, or M-Audio interfaces such as the Delta 1010 or FireWire 410.

Insert an unlimited number of Mix 51 Surround Panner plug-ins on mono or stereo tracks to pan and mix to the Mix 51 Surround Mixer plug-in busses. Each panner can mix to one 5.1 bus and to one quad effect send bus.

Each panner has its own volume, mute, solo, and send controls so you can create a professional, automated mix using Pro Tools plug-in automation. The panner features X and Y position controls, a center % control, divergence controls, and LFE level control. Each panner also features a quad-channel effect send that follows the main pan control for easy-to-set-up surround reverb and effects panning.

The Mix 51 Surround Mixer plug-in provides three independent 5.1 busses so you can manage submixes such as dialog, music, and FX. It also provides three independent quad effect send busses that make it easy to set up surround reverb and effects. Each bus features fully automatable volume, mute, and solo controls for flexible monitoring and mixing.

Mix 51 provides three, quad-channel effect send busses so you can set up surround reverb and delay effects using stereo Pro Tools plug-ins in pairs. The Mix 51 send busses conveniently appear as inputs on aux tracks organized as stereo front and rear pairs, allowing you to mix them into your final outputs.

Mix 51 is designed to smoothly integrate into Pro Tools LE by using the “auxiliary outputs” feature of Pro Tools. All Mix 51 Surround Mixer outputs appear as selectable mono and stereo inputs on Pro Tools tracks, allowing you to process and mix the busses with Pro Tools plug-ins and Pro Tools mix automation. Simply create three stereo auxiliary tracks, set their inputs to the desired Mix 51 Surround Mixer source, group them, and you have a 5.1 bus that you can EQ, compress, limit, and process with all your stereo plug-ins.

Mix 51 is compatible with Pro Tools 7.0 and later on both Mac OS X and Windows XP systems. A fully functional 14-day trial demo can be downloaded at www.neyrinck.com. The download package includes a Pro Tools session using Mix 51 to demonstrate a 5.1 surround mix for a television commercial from director Evan Jacobs. Mix 51 can be purchased online at store.neyrinck.com and from professional audio dealers worldwide for $189 MSRP.