DJ/producer Reid Speed began career in the New York City drum & bass underground in the nineties, when it was still a bit of a novelty for a woman to be DJing. She quickly built a reputation, though, in the word of drum and bass.

Since then, she’s toured the world spinning drum and bass, speed garage and 2-step, she’s released several mix CDs and been the house DJ for the Jamie Kennedy Experiment television show.

Check out her Filthy Nasty Breaks mix below for a taste of her work. She’s also got a collection of free MP3s at her site to introduce you to her work, including DJ mixes and original productions.

She bought turntables in early 1996, and began playing out less than a year later. By the summer of ’97 she was a resident of rave promoters Stuck on Earth and the following year a member of the Direct Drive crew. At their numerous events she cut her teeth playing alongside some of the biggest & the best in the business.

At the same time Reid was serving as her college radio station’s RPM director and also working at drum & bass store Breakbeat Science. Capitalizing on their large and widespread customer base, her demos soon spread across the country, which led to her travelling to many new cities around the US and Puerto Rico, as well as Ireland, Canada, and Mexico.

She visited England that summer and developed a love for Speed Garage, which inspired her to throw her own events, pushing the music she had grown to love. This movement morphed into a love for many other genres from 2 step to nu skool breaks to house and beyond.

In 1998 she distributed her first speed garage/2 step/house tape and in 2000, Reid, DB and 4.0 Marketing came together to do a successful series of 2 step events, including the first 2 step showcase at the 2000 Winter Music Conference.

Reid had also begun working on original production, releasing “SIMPLOT” with FS on Jungle Sky, and assisting Datcyde with a remix of NYC jungle anthem “Naughty Ride” featuring MC Blaise, which was released on Taciturn.

In 2001, after thirteen self released mix tapes and one animated short movie for Showtime’s Shonext channel, her debut mix CD Resonance was released by Breakbeat Science. In support of the release, a 40 date tour sponsored by Mixer magazine introduced her sound to an even wider audience. After wrapping that tour, Reid came home to NYC only to do another tour, this time with Madhattan breakbeat kings Ming & FS. They did 28 dates in 30 days across America in an RV. Warming the crowd up for an average of 3 hours a night, Reid developed her signature genre-busting style for the increasingly larger audiences.

After that month on the bus Reid was primed for a massive change. She decided to move to Los Angeles. She started Rude Sound, a party showcasing 2 step and nu skool breaks. In the summer of 2003, Breakbeat Science came calling for their second mix, entitled Life After Dark . Inspired by 9/11 and the decline of the NYC scene (no thanks to Mr Giuliani, Mr Bloomberg, or the darkness pervading the drum & bass scene at the time).

During that summer, Reid also recieved a call from a TV show looking for a special DJ to provide on-air flavor to the show. After competing against hundreds of male scratch/hip hop DJs, Reid was chosen by Jamie Kennedy to play drum & bass for one season on his show, the Jamie Kennedy Experiment which aired on the WB network. She went on to appear as the DJ in an episode of Spike TV’s MDN.

After completing the tour for Life After Dark in late 2004, Ms Speed got back to business with production of original tracks. Her & Sense’s track Bring it Up was recently featured on Richard Vission/ Swedish Egil’s Power Tools. 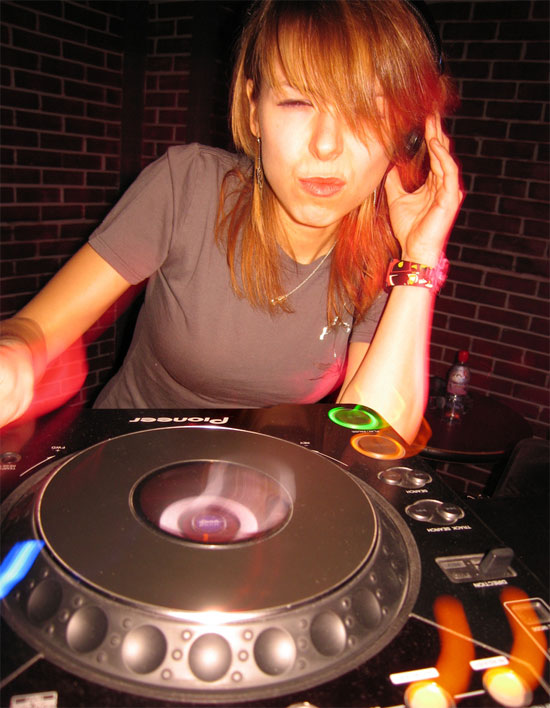 One thought on “Chicks That Mix: Reid Speed”

People often find innovations terrible until they feel the results…