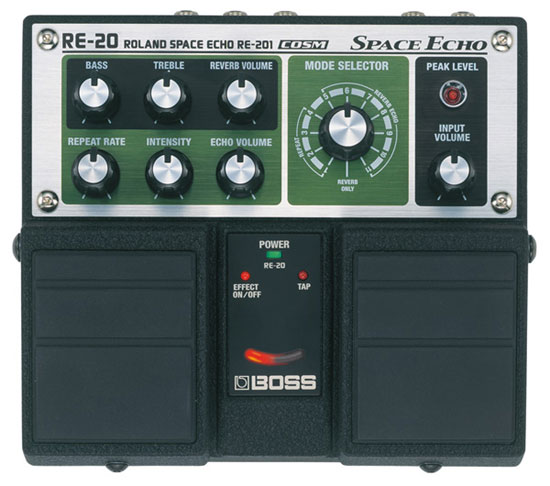 Summer NAMM Show: The Roland RE-201 Space Echo has been reborn as the BOSS RE-20 Twin Pedal. According to BOSS, they’ve recreated every sonic detail and nuance of the original, providing users the warm, unpredictable and highly tweakable retro sounds of the RE-201.

The original Roland RE-201, commonly known as the Space Echo, was an analog delay effects unit produced in the 70’s. Despite its age the Space Echo is still widely sought after and used by many bands today. Now, thanks to new RE-20, Roland’s coveted 201 sounds are available to anyone.

This new twin-pedal features spot-on simulation of the famous Roland 201 with the spacious analog tone of the original Space Echo, including selection of the original 12 Space Echo modes. Faithful modeling of the 201’s tape flutter and magnetic head saturation give this new box an authentic tone while a tap input pedal allows guitarists to set the time by foot for ease of use.

The RE-20’s warm and gritty delay time is even longer than the original.

An optional expression pedal like the BOSS FS-500L allow users to control parameters such as REPEAT RATE, INTENSITY and more, all in realtime.