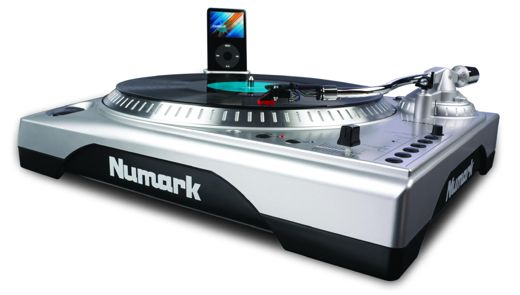 Numark has introduced the TTi iPod turntable, a turntable that includes a Universal Dock for iPod, USB audio interface, a metal platter and pitch control, making it one of the most versatile turntables ever produced.

Numark turntable performance, USB connectivity and the convenience of the iPod are fused together so users can easily transfer old vinyl collections to an iPod. The included software bundle archives records directly to the user’s iTunes Library for transfer to CD or any MP3 player. The software also reduces noisy pops and clicks inherent on some old vinyl recordings.

Owners of iPod (Classic or 5th generation) and iPod nano (2nd or 3rd generation) can record from vinyl directly to an iPod without a computer. People with other iPod models can transfer captured vinyl recordings to their iPod by using iTunes to transfer the tracks after recording.

Numark’s TTi turntable will be available Q2 – 2008 from most musical instrument retailers with an MSRP of $449.