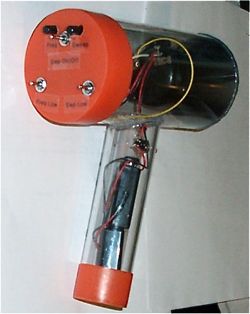 Usually when people talk about sonic weapons, they’re talking about the latest axe, how a musician “killed” last night or how Mike D. slays on the mic.

But the Sonic Devastator is a sonic weapon that will make you wet your pants or run in fear:

It is effective for approximately 20ft but some people are even effected at distances as great as 50ft. Some people are more sensitive to sonic waves then others. The batteries will last for nearly 20 hours of continuous operation before needing replacement.

OK – I need one of these things already.

Our research has shown that by using these adjustment controls it is now possible to drastically increase the sonic output effect of the unit. It is possible to adjust the output for a maximizing effect on certain targets such as humans, dogs, unruly animals etc. One interesting characteristic of high power sonic waves is they are able to transmit much farther then normal sound waves and can easily be heard through thick walls and over long distances if properly tuned.

Although parts of the sonic output are actually above the range of human hearing, the output can easily be heard when the trigger is pulled because the frequency is being swept back and forth. It is a very loud and painful screeching type sound. A good example of the type of irritation it produces is to say its like somebody scratching their fingernails on a chalkboard but at 130 decibels which is about the same sound output levels experienced at a rock concert. When the device is properly tuned and used on a human target the effect causes intense naseau and headaches usually within less than 60 seconds of exposure. Some people actually feel intense pain and pressure on their eardrums and the natural reaction is to want to get away from it as quickly as possible. The device does not cause any permenant harm or damge. The effects of being hit by a sonic blast usually subside after an hour or so.

The sonic waves are highly directional and most of the output is emitted out the front in an invisible cone shape of 45 degrees to be aimed directly at the intended target. The operator is able to hear the sonic blast but its at tollerable levels as long as its pointed away from the operator. The unit is highly effective against most animals due to their ability to hear in the upper frequency bands. Because of this fact it makes a great anti-dog deterrent.

Bitches giving you trouble? The Sonic Devastator has got you covered!

20 thoughts on “Sonic Weapon Will Make You Wet Your Pants”