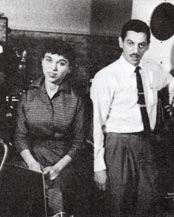 Bebe Barron, who, along with her husband Louis Barron, created the pioneering electronic score for Forbidden Planet, died April 20, 2008 at the age of 82 of natural causes.

Barry Schrader sent me the news, along with this brief bio:

In 1947 she moved to New York and, while working as a researcher for Time-Life, studied composition with Wallingford Reigger and Henry Cowell. That same year, she met and married Louis Barron (1920 – 1989).

Shortly thereafter, the Barrons began their experiments with the recording and manipulation of sound material by means of a tape recorder that they received as a wedding gift. They created a private studio in New York and, in 1955, composed the first electronic music score for a commercial film, Forbidden Planet.

In 1962 the Barrons moved to Los Angeles; they divorced in 1970. In 1973, Bebe married Leonard Neubauer, a screen writer. Bebe became the first Secretary of the Society for Electro-Acoustic Music in the United States (SEAMUS) in 1985, and also served on the Board of Directors. In 1997 Bebe was presented the SEAMUS Award for the Barrons life work in the field of electro-acoustic music. She is survived by her husband, Leonard, and her son, Adam.

Bebe’s last public appearance was on January 12, 2008, at an event held at the Hammer Museum in Los Angeles, celebrating the work of her good friend, Anais Nin. Bebe was too ill to speak in public at this point, but she agreed to be interviewed for a video piece that was shown at the event (below).

Here’s a scene from Forbidden Planet that showcases their score:

How many musicians got their first interest in electronic music from scenes like this?

Schrader also had this to say about the Barron’s approach to music:

They built their own circuits, which they viewed as cybernetic organisms, having been influenced by Norbert Weiner’s work on cybernetics (Cybernetics: Or, Control and Communication in the Animal and the Machine).

The circuits, built with vacuum tubes, would exhibit characteristic qualities of pitch, timbre, and rhythm, and had a sort of life cycle from their beginnings until they burned out. The Barrons recorded the sounds from the amplification of these circuits and this formed the basis of their working library.

They also employed tape manipulation techniques as part of their compositional procedures. The sound qualities of these various amplified tube circuits and the tape manipulations that they underwent formed the musical language that the Barrons created in their studio. Unlike some of the work being done elsewhere, the Barrons’ music reveals long phrases, often stated in tape-delayed rhythms, with the stark finesse of the tube circuit timbres. They created a style that was uniquely their own yet married to the technology they were using.

In 1949, the Barrons recorded a full version of Nin’s House of Incest and four stories from Under a Glass Bell. These recordings were pressed on red vinyl and released on the Barrons’ Contemporary Classics record label under the Sound Portraits series.

In this video, her last public speech, Bebe Barron talks about her friend and mentor Anais Nin:

If you’re interested in finding out more about Bebe & Louis Barron, here are some recommended resources:

One thought on “Electronic Music Pioneer Bebe Barron Dead At 82”