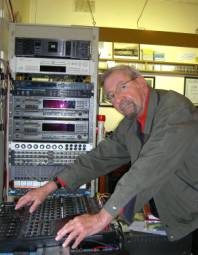 His contribution to concert and entertainment musical repertoire in every genre from pure electronic music to instrumental solos and orchestral and choral works covers the entire second half of the 20th century.

Cary was born in Oxford on 14th May 1925. He served in the Royal Navy from 1943-6, specialising in radar and thereby receiving training in electronics. During his war service he independently developed the idea of what was to become tape music, and began experimenting as soon as he was released from the Navy in late 1946. From 1954 he found himself able to live by score commissions, and from that time produced a large variety of concert works and scores for theatre, radio, film, TV, public exhibitions etc.

He was founder (in 1967) of the electronic music studio at the Royal College of Music, and designed and built his own electronic music facility, one of the longest established private studios in the world. The equipment from this studio was brought to Australia, and most of it was incorporated into the expanding teaching studio at the University of Adelaide. He was also a founder Director of EMS (London) Ltd, and co-designer of the VCS3 (Putney) Synthesiser and other EMS products. He called upon a wide range of resources for generating film, TV, theatre, radio or concert music, special dialogue treatments, or anything in the area of specialised sound. His wide experience as a composer included all aspects of instrumental and vocal ensemble, any facet of electronic music, or combinations of several types.

Tristram played a pivotal role within the Elder Conservatorium until 1986, when he left the University to resume self-employment. During 1988-90, he was largely occupied with writing a major book on music technology which was published in London as The Illustrated Compendium of Musical Technology in May 1992 (Faber & Faber). The American version – substituting Dictionary for Compendium – is distributed by Greenwood Press, Connecticut.

In 1995 and 96 there were performances in London and Adelaide to mark his 70th birthday, and a new suite based on his music for the Ealing film The Ladykillers won The Gramophone Award for best film music CD in 1998.

Apart from composition activity, Tristram was a respected music critic for The Australian newspaper. In recent years he held the position of Honorary Visiting Research Fellow at the University of Adelaide, in which capacity he continued his computer music research. In 2001 the University also conferred on him the degree of Doctor of Music. In 1991 he was awarded the Medal of the Order of Australia (OAM) for services to Australian music. In 1999 he received the SA Great Music Award for the year, and Symphony Australia commissioned a new work – Scenes from a Life – to mark his 75th birthday in 2000. He received the Adelaide Critics Circle 2005 Lifetime Achievement Award on December 5, 2005.

Bio by David Lockett, Director of the Elder Conservatorium, via CDM