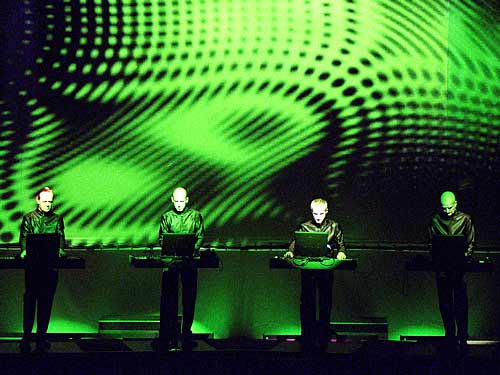 A lot of people commented on the recent post Minneapolis Hates Kraftwerk, which featured an excerpt from the Minneapolis Star Tribune’s review of Kraftwerk’s 100-minute show at the Myth nightclub.

The Star Tribune said that the show had “all the flair of a power-point presentation at a mortgage-foreclosure seminar”, and that “the identically clad-in-black musicmakers stage demeanor was as emotionless and unanimated as the music itself.”

Electronic music performance site LivePA’s M.A.S. has weighed in on Kraftwerk’s Milwaukee show. He calls it “the best and worst” show he’s seen:

This show was great, but also at the same time horrible.

We have discussed on this blog and over there many avenues the issues surrounding LivePA. One of the most common issues that always come up in discussions is the laptop debate. Along with that is the artist who just sits there staring at their laptop through and entire show. That is exactly what Kraftwerk did. Stared at their laptops, all four of them and didn’t move.

Now I know this is sort of their schtick, and in many respects many of the stereotypes of electronic music and musicians have been formed based off of Kraftwerk, but seeing them really do this in person is a rather unnerving experience. You can also see the crowd not knowing exactly what they should be doing during the music because of the stiffness of the artists on stage. At only a few points throughout the entire show did I see anyone really get dancing.

Overall though I don’t want to totally rag on the show. The music was very tight and well done. The visuals were spot on and I can only speculate that one of the four on stage was controlling the visuals. This tightness in their set however leads me to believe that they have a very choreographed performance, with little room for improvisation. Are they checking their email on state? I can’t tell. Heck, I can barely tell that the performers are still alive.

He’s right, this is part of Kraftwerk’s schtick – but people still want to see a show that kicks ass, and it just doesn’t kick ass when it looks like the performers are checking their email!

Check the comments on the original post for more viewpoints, and if you’ve seen the Kraftwerk show, add your two cents worth!

19 thoughts on “More Hate For Kraftwerk In Minneapolis”