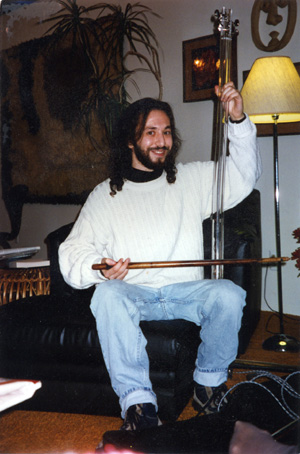 He may also be the coolest teacher ever.

He teaches a class called Building Music at Franklin K. Lane and Wingate High Schools in Brooklyn. Students learn to build their own electric guitars, from winding their own electric pickups to designing the guitar body to fretting the fingerboard (Paul has students utilizing a microtonal seven-tone equal temperament scale).

That’s Rubenstein, right. He wants you to know that he’s not holding a monster bong. It’s the Invisitar, one of his many instrument designs.

After building the guitars, the class then creates original music with these instruments through amplifiers also of their own construction. The students bring a sense of improvisational fun that would be expected from a class armed with homemade amplified electric instruments.

Here’s a track that features students Tyrone and Nick on the guitars they made, Ayonde on electric saron, Hector on claves, Angel on doumbek, Rashid on shaker and Mr. R (Paul Rubenstein) on tambourine:

Teaching kids to build their own electronic instruments so that they can rock out microtonally? That’s a teacher that’s interested in opening minds up, instead of closing them.

Check out the smiles on the kids that he’s worked with.

Here’s a slideshow of the kids and their projects:

Don’t you imagine some of these kids are going to be doing some very interesting things in a few years?

3 thoughts on “The Coolest Teacher Ever”