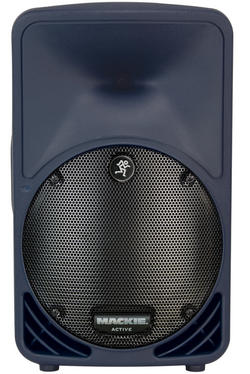 I’ve got a set myself, and can vouch that they sound great and are built like tanks.

Now Mackie has announced the next generation of its SRM Series, with the SRM450v2 and SRM350v2.

The new models feature efficient switching power supplies, a lightweight neodymium woofer and a titanium dome compression driver. The SRM450v2 is 11 pounds lighter than its predecessor and now cast in a distinctive midnight blue enclosure.

“The change in sound from the originals is noticeable across the entire frequency range- the low end is punchier, the highs are more brilliant and the clarity of the mids are greatly improved,” said John Boudreau, Mackie Brand Group VP. “The original SRM’s have been the industry standard for sound quality for a decade; we needed to step it up and create a new standard- that’s what we’ve done with the SRMv2.”

The sound improvement may be great – but, in my book, cutting 11 pounds off the weight may be the best new feature.