Waxy’s Andy Baio has taken a statistical look at how the record industry has changed in the last fifty years, and it looks like there’s a good reason why you hate so much mainstream pop music: the variety of pop music is less than half of what it was in the sixties: 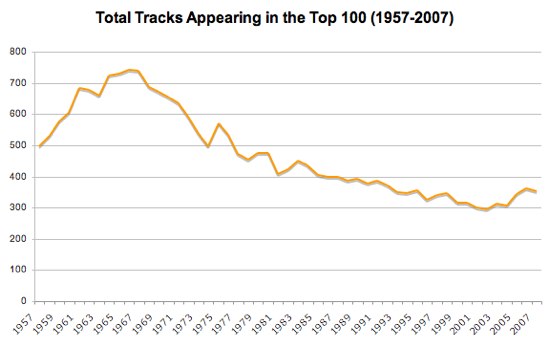 According to Billboard, the late 1960s were the peak of musical diversity in popular music, with 743 different songs appearing on the 1966 Billboard Top 100 chart. It’s fallen consistently since, hitting an all-time low in 2002 with only 295 songs.

Is it any wonder that people are listening to less radio, buying less music and, instead, turning to blogs and podcasts to find new music?