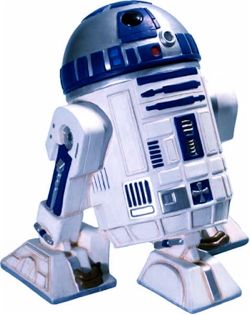 Remember the video we published last week about the sound design of Wall-E?

R2 was very innovative back in its day because there had never really been a talking robot character that didn’t speak plain and simple English. With R2, we had to come up with sounds that people understood as communication from a charming character that had something on his mind. And it was done with electronic sounds, mostly beeps and whistles.

Some of the sounds were made on a synthesizer. Others were little mechanical and motor sounds which were used to allow him to express himself. The whole idea being that the sounds had a sense of communication to them. You understood that he was angry or sad or being rude to 3PO.

Now we come along years later to WALL•E and the requirements were kind of similar in that WALL•E doesn’t speak in clear sentences using words in English like we would normally have. He does have a few limited single words. He can say his name, he learns to say the name of a few principle characters that he encounters, and he’s able to vocalize in terms of making grunts and moans.

He doesn’t beep or whistle or chirp in the same way that R2 did. He has a few electronic sounds in there once in awhile but the emphasis is really on words and their electronic sounds—a voice making a vocal expression.

We can understand the meaning of vocal sounds even if they’re not words because we have a lot of precedence in our own language. We can say “uh huh” or “oh!” Non-word types of sounds formed the basis for WALL•E’s vocalization so you can understand the emotional state he’s in [and] what he’s thinking by the mere intonation of these sounds.

The key to being able to understand WALL•E’s sounds is the animation of the character itself. It’s kind of like a silent movie in a sense that you have to really watch and see what is going on. The typical animated film has a lot of dialogue. Characters are talking fast, they’re setting up punch lines and jokes, and everybody is speaking constantly. But this film is taking a different approach and you won’t be able to follow the story quite as clearly unless you’re watching carefully too.

On Today’s Technology For Sound Design

The big advantage of the digital age is that the recorders are compact. They’re smaller than the microphones now. And with digital you get high-quality recordings without that old analog hum. Plus what use to require going into a studio in order to edit or mix, can be done with off-the-shelf software and a laptop. You can work almost any place, but of course that means you work all the time.

When you record a thousand things for a movie, you need to have a database so that you can find everything. With great browsing capabilities, sound can be at your fingertips. I can find that electrical buzz I recorded ten years ago. And I can cut and paste sounds without any loss in quality. There were huge limitations in the analog-era, especially the degradation of sound when you went from one copy to another.

See the full interview at EM.