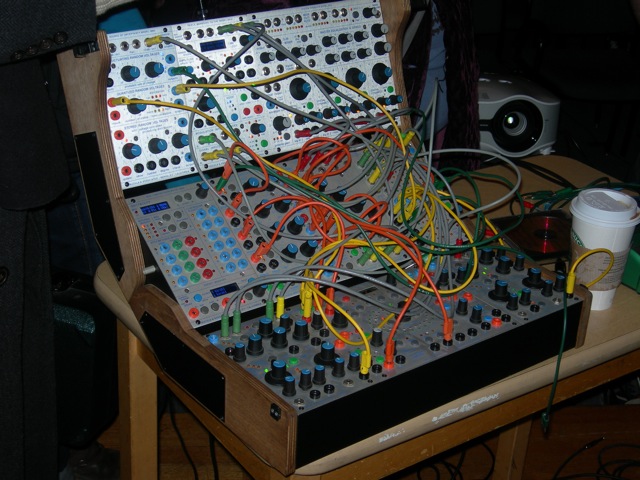 This month’s Electronic Musician has an interesting profile of Alessandro Cortini, best known for his work with Nine Inch Nails.

In the article, Cortini discusses his Buchla 200e modular synthesizer:

“It was kind of like buying a car. But this takes me more places than a car. It’s my favorite piece of gear. If I had to pick one, it’s the most creative. Just the way it’s laid out.

This is a small configuration—just a 12 panel. I knew that I couldn’t begin with an 18-panel instrument, so I tried to get as many high-density modules as possible. The 249e [Dual Arbitrary Function Generator] was a module they weren’t making anymore, but I was able to get one. It’s two sequencers in one. I could have worked with a 250e [Arbitrary Function Generator], but I felt the more each module can do, the better. And I wanted variety, so I have one of the old 259e’s [Programmable Complex Waveform Generator] and the new 261e [Complex Waveform Generator].

I’ve had the pleasure of working with companies like Plan B and Livewire on the EAR system, which are Buchla oriented in a way. But one thing is that they’re not replicating the [Buchla] interface, for good reason. They might be able to replicate the functions: Plan B has the Heisenberg Generator, which is, in a way, like a simplified [Buchla] Source of Uncertainty. The Model 15 oscillator is half a [Buchla] 258. And they sound awesome. But it’s an ?-inch interface. I hate to be this new age, but it doesn’t call me the same way that the Buchla’s banana jacks call me. The fact that it’s half ? inch and half banana makes you work in a certain way. The density of the modules makes you work in a certain way. And the fact that it’s designed to do quad and that voltage-controlled panning is built in—it’s so easy to achieve stuff that moves around.