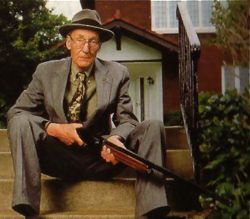 Cut-up text is an aleatory literary technique in which a text is cut up at random and rearranged to create a new text.

It was used notably by William S. Burroughs in the late 60’s and early 70’s, and influenced the work of David Bowie, Curt Cobain and others. More recently, cut-up text has been used by email spammers to create text that will get around spam filters. Because of the huge volume of spam that is generated, some interesting examples have emerged, which are called “spamoetry.”

Then, from sea to shining sea, the God-King sang the praises of teflon, and with his face to the sunshine, he churned lots of butter.

The Cutup Engine cuts up text and makes something different out of the pieces. You can provide the text directly, or URLs of things on the web.

Here’s a randomized chunk of a recent Synthtopia article:

an already pre-mixed music at the time, including she was faking the movements of beat-matching or mixing. for real, just acting.” she was really any kind mixing the from a tiny CD wallet as the one and was just movements to get we use box at the and was just making purely a fraud.