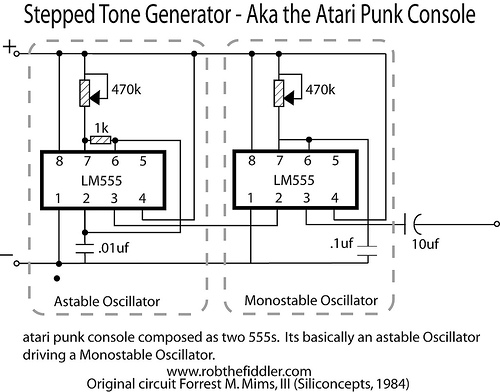 The Atari Punk Console is a simple DIY noisemaker circuit that is inexpensive, easy to build and easy to mod. The circuit is based around an astable oscillator (square wave) driving a monostable oscillator which creates a single (square) pulse.

Here’s an example of a dual Atari Punk Console in action:

There are typically two controls. One for the frequency of the oscillator and one to control the length of the pulse. The controls are usually potentiometers but it can be controlled by light, temperature, pressure, etc. by replacing the potentiometers with a suitable sensor (e.g., photo resistor for light sensitivity). Most of the time there is also a power switch (often a toggle switch) and a volume knob.

The circuit is easily adaptable and has been configured in many ways and built into a wide variety of cases, from metal Ikea bowls to light bulbs. Its flexibility has led to wide scale popularity among electronics enthusiasts. It is often suggested as a good circuit to build for beginners.

The Stepped Tone Generator was named Atari Punk Console (APC) by Kaustic Machines crew because of its square wave output similar to The Atari 2600’s. Kaustic Machines also added the -4db line level output to the circuit. The original circuit was intended to drive a small 8 ohm speaker.

Here are some great resources for more into on the Atari Punk Console: