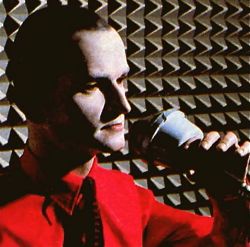 The announcement was made on Kraftwerk’s fan site:

This partnership has generated an incredible music and huge advances in music technology.

Florian is a great musician, always seeking the perfect sound through technology. Refined and perfected sounds and vocoders to impossible levels of perfection.

Our thanks for the state of art that led to Kraftwerk’s music all these years.

And our wishes for success Florian’s new projects as well as to this new Kraftwerk.

Schneider’s departure makes you wonder: how long until the entire band is replaced by robots?

Schneider did participate in Kraftwerk’s most recent tour. Kraftwerk plans to keep touring, and is scheduled to open for Radiohead on the group’s tour of Latin America, starting March 15 in Mexico City.

Kraftwerk was founded in 1970 by Florian Schneider (flutes, synthesizers, electro-violin) and Ralf Hütter (electronic organ, synthesizers). The two had met as students at the Düsseldorf Conservatory in the late 1960s.