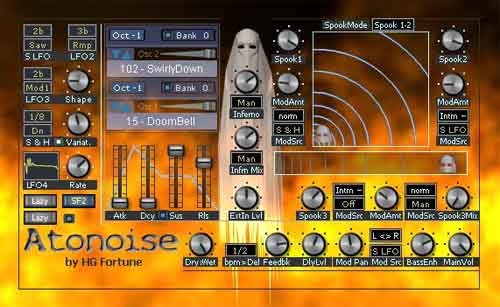 Looking for something a little different?

Atonoise Pro is available for 9 Euro.

Here’s the description, which seems a bit like Googlish – so you’re warned!

This is a VSTi synthesizer and in Pro version VST effect for fairly spooky, SciFi and others alike sounds. It’s got no filter by design and you won’t hardly ever hear the basic waveforms. It’s working atonal i.e. with no real defined pitch therefore it is not what you might expect – instead this one is esp. for various kinds of noisy sounds.

What should be known: Atonoise is basically not meant for full polyphonic play, rather than mono- or duophonic though 5 voices are supported simply to have some reserve at longer release settings of the ADSR. Using more than two voices even might lead to slight distortions – in such case lower the levels at the oscillators or Dry/Wet.

There are two oscillators each with a level adjust and both followed by one amp ADSR EG. The different waveforms simply provide different flavours to the modifiers.

There are four modifiers: Inferno and Spook 1 to Spook 3. Inferno adds via Inferno Mix some upper harmonics generated from the input very similar to the timbre feature of my Swamp VSTi. Spook 1 and Spook 2 modifiers can be used as single, in parallel 1|2 or in series 1-2 (see image Signal flow below). The spook amount is determined by the two spook knobs while the XY-Pad ads more or less density i.e. a fairly metallic sound in lower left corner or less density at upper right corner. This can be modulated by selectable and even invertible LFOs. Moving the ‘Ghost’ image like a joystick ball manually is another option to modulate density. Spook 3 adds even some kind of reverbish flavour when slider is moved to the right.

Anyway please note that using all four modifiers at the same time may soon be the overdose to the mix instead try with more subtle settings by selecting only two or three modifiers.

For usage as VST Effect (Pro version only) one can run an external audio signal through the modifiers instead of or in addition to the internal soundsources. There is an External Input Level adjust knob to control the amount of input signal while the Dry/Wet knob serves to balance between the Dry incoming and the Wet processed signal. Note: Using as synth this knob should be turned fully to right = wet position.