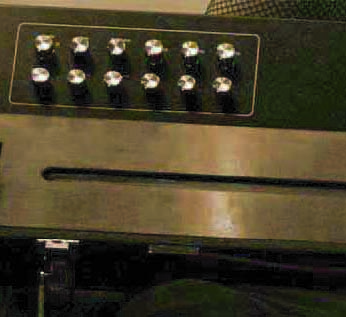 Eowave has announced the Persephone Mark II, set for release in June of 2009.

The Persephone markII is a fingerboard synthesizer in the tradition of the first non-keyboard electronic instruments from the 1920s, preserving the incomparable warmth of analogue sound generators whilst featuring digital controls, routing presets and a unique duophonic ribbon.

The major improvement with the Persephone markII is the ribbon duophony. With this new Eowave ribbon and a new synthesis architecture, this is possible to play different sounds simulteaneously, to modulate one sound source with another while playing…

With its two analogue oscillators and LFO, the Persephone markII can generate notes with a variable range up to ten octaves to create deep and resonant cello tones on the lowest notes to ultrasonic frequencies on the highest pitches. An optical modulation key will transmit the slightests vibration to create expressive modulations. The two analogue oscillators sine to saw waveforms and a 12 dB resonant lowpass filter will give a more or less brilliant sound.

The ribbon enables to play glissando like on a Theremin, les Ondes Martenots or a Trautonium. The addition of one oscillator takes all its dimension with the new duophonic ribbon which extends the instrument sonorities spectral to play simple chords, but also enables numberless modulations, e.g. FM of one oscillator on the second one with two fingers. Routing presets have been increased to 16, including 8 freely editable presets. This section significantly increases the instrument control and modulation possibilities.

With a complete outputs section with 4 CV out, 2 pedals in, MIDI in & out, audio out, USB (MIDI), the Persephone markII can be turned into a powerful and unique controller to control most of your analogue or digital synths.

If you’ve used the Eowave Persephone Mark II, leave a comment with your thoughts.