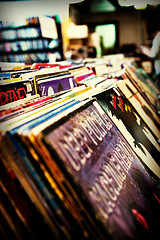 If you’re like a lot of music fans, you probably have fond memories of discovering music at a local record store.

The trend towards digital music has rendered traditional record stores obsolete, yet there are still thousands of indie record stores still standing.

Because they don’t suck – and they are still working to keep indie music alive, in towns all over the world.

Support indie music and your local music scene by making a trip to your local record store on April 18th!

The National Association of Recording Merchandisers has announced that over 1,000 record stores around the globe will be celebrating Record Store Day on Saturday, April 18.

This second annual event was created to recognize the impact local record shops have had on the world of music over the years. Participating countries include the United States, Canada, the United Kingdom; France, Italy, Germany, Belgium, Greece, the Netherlands, Israel, Japan, Australia and New Zealand.

Across the United States, hundreds of other live performances and signings will be featured at participating retail outlets throughout the country. All confirmed musical appearances are listed here: www.recordstoreday.com.