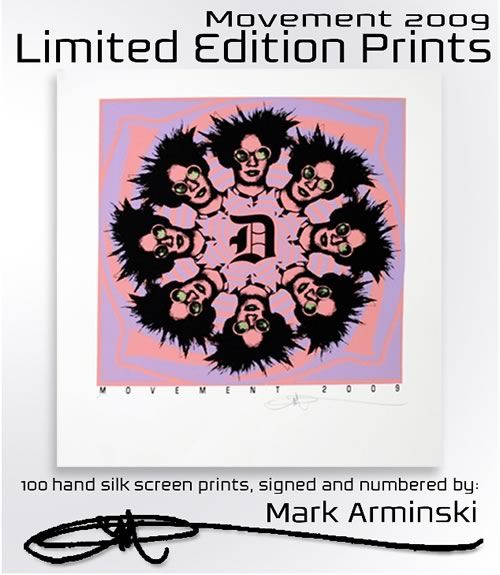 Each psychedelic print depicts eight crazy-haired heads wearing green-lens eyeglasses surrounding an Old English D. The four color image has been silk screened on an 18 x 19 piece of cotton rag. Each print has been signed and numbered by Arminiski. Prints can be purchased at 323east.com for $40 plus shipping and handling.

Considered a leader in the new school of rock ‘n’ roll posters, Mark Arminski has painted the landscape of Detroit and beyond with his signature pieces of concert art. His first commissioned poster work was in the form of silk screens for Iggy Pop and the Smashing Pumpkins. Arminski is notable for bridging the gap between the psychedelic art of the 1960s and the grunge aesthetic of the early 1990s, and he has emerged as a genuine equal among his own mentors. While much of his work was originally found in and around Michigan, he has designed concert posters for events in New York, Los Angeles, and San Francisco, and he is regularly commissioned to design CD cover art. Arminski continues to have great influence among poster artists and his rich eye-popping designs have expanded beyond print media to body art and murals.