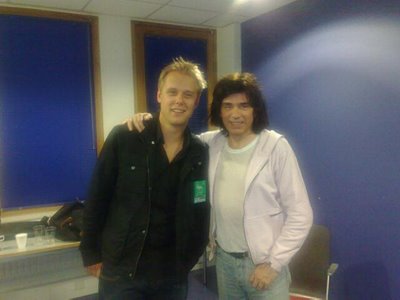 Jean Michel Jarre posted this photo of himself and Armin van Buuren, after his Amsterdam concert:

After the show, I met Armin van Buuren. He told me he was a great fan of mine and that my music inspired him to become a musician!

I felt really honored coming from one of the 2 or 3 best DJs in the world.

We discussed about how my music has influenced trance music, which is so huge all over the world, except in France where we are more electro. I definitely feel part of that trance family. Armin is also a great human being and we promised to each other to keep the contact and to collaborate on one project, one of these days.

It’s a great photo – because superstar DJ Armin van Buren has the same look on his face as every other musician meeting one of his heroes.

That look that says “This is so awesome that my brain can’t entirely process it!”

Here’s Jarre with another fan after the same show, Michel van Osenbruggen, aka Synth.nl:

Well it was a big honor for me to finally meet the man that put my to buying my first synthesizer and inspired me to start composing and producing my own music. It will be a long life memory for me for sure.

I’ve had similiar experiences, meeting personal heroes like BT,  Ken Jordan of The Crystal Method or ambient artist Robert Rich. In each case, I ended up impressed with how gracious these artists are with their fans – even fans that may be temporarily inarticulate.

Have you had an experience like this – as either a musician or as a fan?