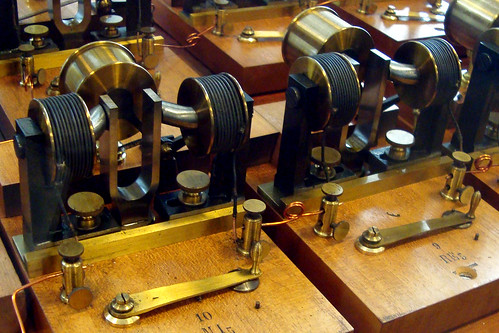 This is another fantastic shot of the Harmonic Synthesizer:

In the lobby of the McLennan physics building, University of Toronto. The pitches are actually labeled on the wooden blocks – Mi5, Re5, and so on.

This marvelous machine was used to dress the output of the large fork and resonator with a controlled set of overtones. Each fork is mounted in front of the appropriate resonator and driven by coils connected in series using the electronome interrupter tuned to the fundamental. A small keyboard opens the resonators.

It appears that the components of this apparatus have been redeployed, as the present set-up does not agree with the illustration in the 1889 catalogue and several pieces have been mounted with screws through the maker’s ark – an unlikely occurrence in the original mounting. This was probably done to allow operation of the keyboard from the back.

I really like that this has something called an “electronome interrupter”.

If you know anything more about the history of harmonic synthesizers, please leave a comment!