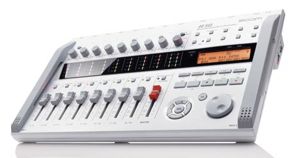 Samson representatives are promoting the Zoom R16 as “three production tools in one device“:

The R16 runs on six AA batteries. Recording onto SD memory allows for up to 32 GBs of audio files, and lightens the weight of the recorder. The R16 connects to the user’s computer via USB, and comes bundled with Cubase LE audio software.

Finally, the R16 can be connected with a second R16 unit via USB; one can be designated to function as the USB master and the other as the USB slave, allowing synchronized transport operation and recording on 16 tracks simultaneously.

The Zoom R16 will be available in stores “in the next few weeks,” according to a company representative, and will retail for $399.