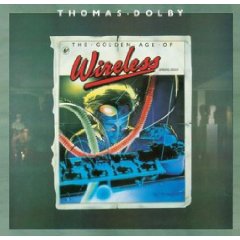 Thomas Dolby has remastered and rereleased his first two albums, The Golden Age Of Wireless (1982) and The Flat Earth (1984).

The new Collectors Editions are released on CD and as digital downloads. They feature special bonus tracks, personal sleeve notes, live recordings, original demos, and rare video footage from the period. Dolby oversaw the Abbey Road remastering sessions himself, and sorted through studio outtakes and cassette tapes to put together definitive versions of these LPs.

Both The Golden Age Of Wireless and The Flat Earth achieved Gold status in the USA and yielded Top 20 singles around the world. GAOW was released in several formats due to the success of the breakthrough songs She Blinded Me With Science and One Of Our Submarines, which were not on the original LP but were added by Capitol Records following Dolby’s sudden emergence in 1982 as a star of the nascent MTV. The re-released GAOW combines all variations of the album, and is accompanied by a DVD of the full-length 1983 live concert performance Live Wireless, originally available only on laser disc.

In a recent edition of Wired magazine, JJ Abrams said: “Dolby’s ‘The Golden Age of Wireless’ remains one of the greatest albums ever recorded. And his follow-up records were a brilliant mix of heart, soul, and electronics. He’s a genius.”

Dolby’s sophomore album The Flat Earth originally featured only seven songs. The Collector’s Edition  is enhanced by five additional tracks, including the previously unreleased Marseille and a pair of Dolby songs written for films. Owners of the Collectors Editions will have access to a special area of the ThomasDolby.com web site to download free additional rare songs, lyrics and other goodies.