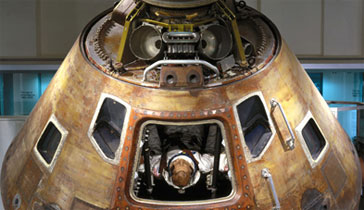 Brian Eno‘s classic ambient soundtrack Apollo will get its live premier July 20-21 at the Science Museum of London.

Eno will introduce the premier of the new arrangement at the concert on the 20th.

* Children aged 14 and older are welcome to attend accompanied by an adult.

To celebrate the 40th anniversary of the Apollo 11 Moon landing the Science Museum, alongside Sound and Music, present the premiere of a new live arrangement of Brian Eno’s 1983 album ‘Apollo’.

The performance by amplified ensemble Icebreaker, with BJ Cole on pedal steel guitar, will be accompanied by original footage of the Moon landings by director Al Reinert (For All Mankind, 1989) projected onto the giant screen of the Science Museum IMAX cinema. Supporting the new arrangement of ‘Apollo’ will be performances of new material based on recordings from space.

Taking place in the Science Museum’s iconic ‘Making the Modern World’ gallery, which includes the real Apollo 10 Command Module, these performances will be by experimental artists Douglas Benford and Iris Garrelfs.

The concert will take place in the Science Museum IMAX Cinema and ‘Making the Modern World’ gallery.