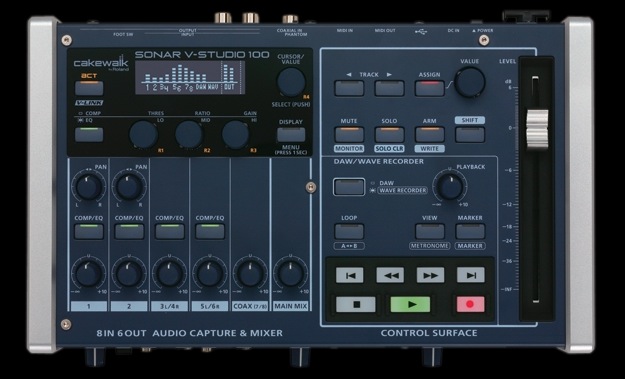 CDM’s Peter Kirn has put together a very nice look at the new Cakewalk V-Studio 100, an example of a new class of all-in-one computer music devices. .

At US$699 street, there are cheaper options around, but by the time you add a control surface, a mobile recorder, a mixer, and an audio interface together, it’s a different picture. There are also other control surface-mixer-interfaces out there, but some skimp on audio quality while others lack the VS’ elegant compactness.

The VS still counts as the most control, mixing, and audio functionality I’ve seen in any backpack-friendly box. And as such, for the laptop music production warrior wanting to maximize space and power, it’s part of a handful of essential gear to consider.

If you’re a Sonar user, checking out the Cakewalk V-Studio is a no-brainer. The V-Studio offers Mackie Control support, though, so it’s an option to consider for use with other apps, too.