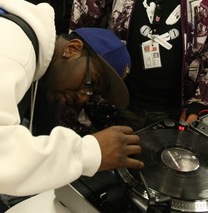 Vinyl is one of the fastest growing formats for music and it’s not just a fad, according to a report in the New York Times:

Sales of vinyl albums have been climbing steadily for several years, tromping on the notion that the rebound was just a fad. Through late November, more than 2.1 million vinyl records had been sold in 2009, an increase of more than 35 percent in a year, according to Nielsen Soundscan. That total, though it represents less than 1 percent of all album sales, including CDs and digital downloads, is the highest for vinyl records in any year since Nielsen began tracking them in 1991.

As more record labels added vinyl versions of new releases, the industry had to scramble to find places to press discs, said Mike Jbara, president and chief executive of the sales and distribution division of Warner Music Group.

The story also has a fantastic quote from Jbara:

“It is absolutely easy to say vinyl doesn’t make sense when you look at convenience, portability, all those things,” Mr. Jbara said. “But all the really great stuff in our lives comes from a root of passion or love.”

This trend makes recent reports on the death of the Technics SL-1210 MK5 turntable that much more inexplicable.

Do you think that DJs switching to digital has accelerated the growth of nostalgia for vinyl?