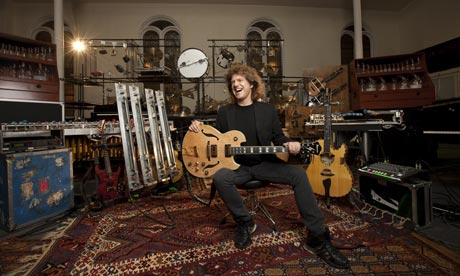 The Guardian has an interesting profile of pioneering jazz artist Pat Metheny and latest recording, on which he replaces his band with music robots:

The jazz band at Manhattan’s Legacy Studios is swinging: piano, vibes, bass, two guitars, percussion and drums in fast, syncopated flow. It’s playing an effortlessly melodic piece that could only have been written by Pat Metheny. This much is obvious from the song’s memorable hook and harmonic complexity, but also because he is the only musician in the room. The instruments are playing themselves.

The marimba belongs to Metheny’s old friend and collaborator Gary Burton, but the mallets are being operated by robots, controlled remotely by computers in the next room. The kit, on loan from drummer Jack DeJohnette, has been deconstructed and strung on wires from a steel frame. Each cymbal or snare has its own stick, brush and beater.

“I’ve always had a problem with electronic sound,” says Metheny. “When a whole bunch of sounds are jammed into one set of speakers, that’s not the way I hear it. I’ve been searching for some kind of acoustic expression of ideas … a means of getting something in the air moving.”

Metheny’s music robot band was developed with the help of several inventors, chief among them Eric Singer of the League of Electronic Musical Urban Robots.  Orchestrion, his new album, will be released on 25 January on Nonesuch.