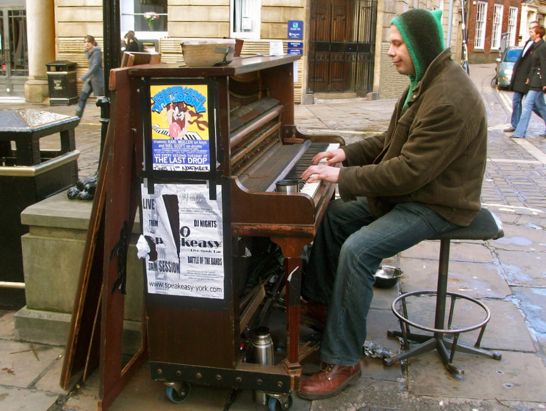 Our recent article on Apple’s iPhone 4 introduction and what it means for musicians – 5 Reasons Musicians Should Get An iPhone 4 – generated a lot of discussion.

Now some other music websites, including MusicRadar and CDM, have joined in the discussion. CDM’s Peter Kirn, in particular, laid the smack down on me, saying “James at Synthopia lists a number of reasons to buy one that to me just aren’t quite right,” and going on to offer his idea of a reality check.

I’ve collected the most interesting arguments for why musicians don’t need an iPhone below.

Check ’em out and let me know what you think!

Windows Is The Top Mobile Platform

Seriously. Top handheld, yes. Top mobile, no, because the remaining popular “mobile” solution for music is a laptop.”

Some readers had similar arguments.

Joel says “A Netbook with Skype and free Open Source Applications does more for much less – and no monthly fees. Plus it runs Reaper (licensed, of course!) just fine.”

“For the past year I’ve been using a $179 netbook that seems to do way more than my roomate’s Iphone. I’ve been amazed with how much you can get done with just a 900mhz celeron and XP. Especially without having to re-purchase your applications in a different format.” adds Chris.

iPhones are expensive and musicians are poor.

That’s true. When you include the phone & data service cost, iPhone owners are going to pay a couple of grand over a 2-year contract. That’s a lot of money for a phone.

Who can affort that sh**?

“Real musician play on real devices,” says reader trz303. “All those ‘music’ apps are nothing more than toys.’

And Chris notes that “Mutlitouch devices are cool and can be fun, but I’ve found the standard keyboard and mouse to be most productive.”

The tiny screen of an iPhone can be fiddly, compared to traditional music interfaces. And, while the iPhone 4 bumps up the screen resolution, it doesn’t make the virtual buttons & keys any bigger, or your fingers any smaller.

And the iPhone was not designed to be a professional musical device, so it lacks the standard connectivity that would ensure interoperability and quality audio output.

We Live In The Future And The Internet Is Awesome

Kirn argues that musicians don’t need iPhones, because we live in the future and the Internet is awesome.

Not needing a device or a platform is part of the beauty of this being the year 2010 and not 1984. In 1984, a sea of incompatible computers with proprietary standards for everything from simple serial connectors to displays cost more money, were harder to operate, and eventually wasted your time. (One plus: they hooked up to your TV set, no DRM-locked HDMI cables required …but I digress.)

Now, we live in the future. We can choose from platforms that use standards, that communicate via standards, that talk via The Internet and Internet Standards and Browsers so it doesn’t matter what gadgets your friends might have.

We have obscenely cheap electronics, so you can make electronic music with $30 in parts and a speaker, not a six-month residency at a prestigious Research Institution in Paris.

In other words – the iPhone locks you into a contract, the apps Apple approves and a limited selection of peripherals.

$30 in parts and a speaker, on the other hand, let you avoid the six-month residency at a prestigious Research Institution in Paris so you can make electronic music on the cheap.

I don’t need that crap!

Gordon fleshes this idea out a little better, saying “I find myself increasingly using a notebook for jotting down ideas as they come to me. By that I mean a $1 pad of paper and a biro.”

“Maybe a good test of whether or not some musical idea is worth developing or not is whether or not it survives in your imagination until such times as you have access to an instrument,” adds Gordon. “As for ‘on the go’, what about all of the real world around us – full of amazing possibilities – when we’re not intent on peering at yet another electronic screen?”

Could the iPhone be a case of too much technology and too much connectivity?

While I’ve heard some interesting arguments against the value of iPhones for musicians, I’m not convinced.

So, there you have it. 5 reasons why you don’t need a new iPhone – and why I’m not convinced.

I’m still waiting for the Scooby Doo ending to this discussion. “I would have rocked the house – if it wasn’t for those meddling kids and their iPhones!”